A warm welcome to author Emjay Haze, the creative mind behind "Elfin Magic" 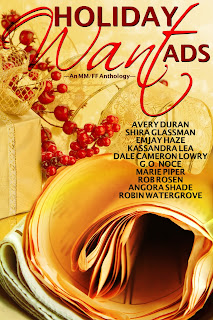 Paul is the new manager of a holiday gift shop at the mall. After placing a help wanted ad for Christmas Elves, Paul receives an email with a picture included, and he’s immediately smitten with Aaron—Paul hires him on the spot. Will working closely with the hot college co-ed prove to be Paul’s undoing, or will Elfin magic bring the two men together?

"Oh, hey Aaron. Ready to get started?" He willed his hard-on away, which was difficult with the gorgeous man standing in front of him, but he was his employee, and sexual harassment didn't look good on one's resume, so....

Aaron leaned against the door jam, smirking. "Must have been good."

"What?" Paul turned an even brighter shade of red, if that were possible.

"Whatever you were perving about." Then thankfully, he let Paul off the hook. "So, where do we start, boss?"

They spent the next few hours organizing the shelves similar to the storefront, so items would be easier to locate. Aaron was good at this. Paul liked to watch him work, his biceps flexing whenever he lifted something heavy, or reached for the top shelf. God, I'm such a creeper.

"So, it's not then?" Aaron turned around and caught Paul staring at him.

"Not what?" Paul had no idea what he was getting at. He was mesmerized by that ass.

Paul shot him a confused look.

Paul wasn't sure when his legs started moving, but he was now directly in front of Aaron, who smelled so good, he just wanted to kiss those teasing lips. "I don't think it's ever come up," Paul said, a dream-like quality in his voice.

"Hm," and then Aaron ducked under Paul's arm, as he was leaning, arm stretched out against a shelf. "What's next boss?' And the moment was over. Paul kicked himself for not kissing Aaron right then. That boy so needed to be kissed, teasing Paul like that. It was a bad idea though, even if not against company policy. Actually, he'd need to look that one up.

They finished up for the day and Paul sent Aaron home. Aside from the fact he was simply edible and Paul was extremely attracted to him, Aaron was a great worker. He followed instructions but gave constructive input as well. Paul couldn't wait for employee training to begin and he could see what a salesperson he'd make. But, there were six other trainees as well, and they'd never be alone. Paul vowed to make his move tomorrow.

I had always wanted to write, but never had the inspiration or gumption to actually do it, until six years ago I was involved in a fandom and read my first fan-fiction story. It was hot, steamy and very gay. I fell in love. There was one particular story I followed and I began conversing with the author and ended up as her beta. She encouraged me to start writing, and I did with great encouragement from the fandom community. Then, two years ago, I decided to take the plunge from fan-fic world and try and get published writing gay romance.

I love writing gay characters and their romantic adventures. I will write other genres some day, but I'm just having too much fun right now.

What inspired you to write Elfin Magic?

I wanted to write short stories to get my name out there and holiday want-ads sounded like a lot of fun. I remember going to a holiday gift shop as a child and it was very much like the experience the little girl in this story, Sophie, has. The characters and the story-line just came together. I love writing first encounters.

Have you ever placed your own want ad? What was it for?

We rent out our garage which my husband converted into a studio apartment. I've always found renters through Craig's list. A few years ago, after my first tenant of two years moved out, I needed to quickly find another. So, I put out an ad, but I also searched ads from people looking to rent. I answered an ad from a woman looking for a dungeon.

I actually considered it for a couple of minutes, but I had teenagers at home and I could just see my fourteen year old son and his friends trying to peak through the windows. And I live in a family neighborhood that would not approve. So, I had to turn her down. She was a little annoyed, since I had answered her ad for a dungeon; I obviously knew what she'd be using it for. I apologized profusely for my ignorance. She was a very nice person with had a family of her own, she tried explaining to me. I'm sure it's not easy trying to rent a dungeon. I wasn't judging her at all, but yeah, just couldn’t do it.

The most challenging thing for me is finding time to write. I have a full time job, and I'm married and have a teen still at home. Also, no one in my family really understands why I write this stuff. But they put up with it while I drag my laptop to the living room to watch a movie.

The most rewarding thing is when readers tell me they liked my story. That first contract was pretty rewarding too.

What types of stories do you enjoy reading most? Do you have a favorite genre/author?

I read m/m romance almost exclusively. I subscribe to kindle unlimited, so I've gotten to read a lot of things that I might not have purchased, but I can borrow. I really like Mercy Celeste and Aimee Nicole Walker. Not all authors have books available on unlimited but there's quite a lot.

Three of my favorite authors are Eli Easton and her sex in Seattle series, Xavier Mayne and the Brandt and Donnelly Capers, and Heidi Cullinan's Love lessons and the Special Delivery books.

I mainly read contemporary gay romance because that's what I write, but I like some of the vamp/wolf stories too.

What are you currently writing about? What can readers expect from you in the future?

I have another short story coming out in January for the Snowed-In anthology, and my first novel, Taking a Chance will be out in February. Mid-western college graduate Ethan Moore goes on a job interview at an advertising firm in San Francisco. That night, he meets a stranger in a club, and takes him back to his hotel for a night of sex. A couple of weeks later, he gets the job and flies back to start his new life and discovers that his new boss is the gorgeous man he slept with. While Evan wants prove himself a worthy employee, his boss, Chance Harlow doesn't make it easy on him as he's made his intentions known, and he's way too hard for Ethan to resist.

I am currently writing a story that will be a three-book series called After Hours. Alex is a corporate middle manager, stuck in a great wall-street job, when he meets club waiter and graduate student, Nick. Alex really wanted to be a chef, but his parents forced him to get a useful degree and give up his dream. Nick was a rich kid whose gayness was inconvenient for his family. They disowned him when he came out in college, and now he's working two jobs to put himself through grad school so he can become a teacher and help kids like him. Their meeting is fate and they will help each other get through their insecurities. Oh, and there's lots of hot sex.
Author Links: