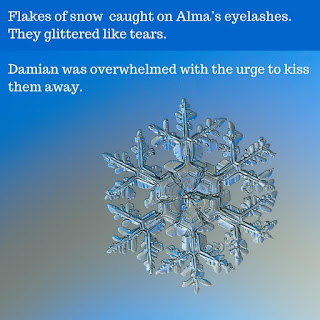 Ex-Mormon Alma Larsen doesn't know the first think about alcohol, so he hires bartender Damian Banks to help out at his winter holiday party. They build a friendship that simmers with sexual tension – and possibly something much deeper. Will this Christmas bring them both a love that lasts?

Wanted, the ad said. Bartender for office holiday party. Should be easy-going, LGBT-friendly, and have server’s license and great references. Competitive remuneration.

Damian clicked on the show contact info link at the end of the Craigslist ad. Up came a phone number, email address and the name Alma.

“Alma,” Damian said out loud, enjoying how the Spanish consonants moved in his mouth. It had been too long since he’d spoken the language at length, but it still felt right on his tongue. He could almost hear his mother’s voice as he repeated the word: “Alma.”

“Hijo de mi alma,” she would call him when he needed it most – child of my soul. When he was small, he’d been plagued by night terrors and nightmares, often waking up in the pitch blackness to the sound of his own blood-curdling screams. His mother would pull him to her lap, whispering into his feverish scalp, “Hijo de mi alma, no te preocupes. Mami está aquí.”

Child of my soul, don’t worry. Mommy is here.

He picked up his phone and dialed the number.

“Hello, this is Alma Larsen,” a voice said on the other end of the line. Damian startled. The voice was deep, and not a womanly deep. Not Nina Simone or a grandma who’d smoked three packs a day her entire life. It was Barry White deep, the kind of voice that made a man’s balls stir and his big toe shoot up in his boot.

“Y-yes, hello,” Damian stammered. Damian never stammered. He was smooth and collected. Nothing could blow his top. That’s what made him a good bartender. “My name’s Damian Banks. I’m calling about your ad on –”

“Please leave a message and I’ll call back as soon as I can.”

Voicemail. Damian had gone all aflutter over a goddamn voicemail message.

He didn’t trust himself to sound any smoother the second time around. He hung up and sent an email.

I’ve been writing since I was a kid and wrote plenty of young adult fiction and queer literary fiction in high school and college. Back then (in the 1990s) was a rather depressing time to read and write queer fiction. The tragic queer was still the dominant archetype and what publishers preferred. I burned out. I started writing again a few years ago because I still had stories burning to get out, and fell into erotica sort of by accident. Two characters I was writing insisted that an important part of their relationship development happened in bed, so of course I was compelled to show that. And it was fun to write! I continue to enjoy writing erotic romance, though I also write sweet romance and even the occasional “literary” piece.

What inspired you to write Mi Alma?

Like the main character Damian, I spoke both English and Spanish as a kid. I also had a pretty religious upbringing. I often write about gay people coming from conservative religious backgrounds, especially Mormons. Because of my Spanish, I’ve always thought it was interesting that one of the main characters in the Book of Mormon is named Alma, which means “soul” in Spanish. It’s not a common name in Spanish, but when it is given, it’s a girl’s name. Among English-speaking Mormons, though, it’s a boy’s name. That gave me a place to start: a gay Dominican man meets an Alma over the internet and initially assumes Alma is a woman. Later, he finds out Alma’s a hot guy. Sparks fly.

Have you ever placed your own want ad? What was it for?

I post on Freecycle a lot. Does that count? Usually I’m giving stuff away, but once I asked for a bird feeder—and got one.

What's the most challenging thing about being a writer? What's the most rewarding?My biggest challenges are probably physical. I’ve had issues with wrist and elbow tendinitis since I was in college. If I write more than 2,000 words a day, my hands are bound to complain. I use dictation software as often as I can so I can pad my word count without injuring myself.

The most rewarding is creating worlds that readers can escape to or find comfort in. I love when readers tell me they connected to a story.

What types of stories do you enjoy reading most? Do you have a favorite genre/author?

I read just about anything. Currently, I’m going through a lot of European fairytales: the Grimm brothers, Hans Christian Anderson, Irish folktales, and a few Russian tales. I also read a lot of memoirs, and of course erotica and romances. I also tend to read a lot of stuff related to what I’m writing about. For example, I’m working on a story about werewolves, I’ll read as much nonfiction about wolves as I can get my hands on. I don’t have a favorite author overall (I love too many of them), but I recommend Johnny Townsend to anyone interested in gay Mormon fiction.

What are you currently writing about? What can readers expect from you in the future?

I’m always writing about gay Mormons. It’s somewhat of a compulsion. So there will be more of that for years to come. I love watching cooking reality shows, which naturally means I’ve written a piece or two about romance blossoming between fictional contestants. Fairy tales and cats show up in my stories more often than I’d like to admit. Readers can probably expect that, too.

But honestly, the muse often takes me in weird directions. For all I know, my next big piece could be about superheroes and deep sea diving. Or HVAC inspectors. Or homoerotic relationships between plants. This world is an interesting place to live, and so is my brain.

Dale Cameron Lowry lives in the Upper Midwest with a partner and three cats, one of whom enjoys eating dish towels, quilts, and wool socks. It’s up to you to guess whether the fabric eater is one of the cats or the partner. When not busy mending items destroyed by the aforementioned fabric eater, Dale writes and edits things for a living, and for fun enjoys wasting time on Tumblr, listening to Mormon-related podcasts, studying anatomy and neurophysiology, getting annoyed at Duolingo, and reading fairy tales.