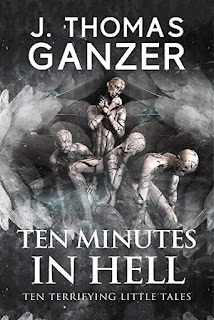 I recently had the pleasure of reading Ten Minutes in Hell by the multi-published J. Thomas Ganzer. I’m familiar with many of his books, from his Chicago Secrets trilogy, to his short story collections, and I can even brag I’ve had the golden opportunity to read some of his unpublished works. I can brag further and say he’s my friend, we’ve worked together on writing projects, and he’s also a great human being. All that aside, his new collection of short stories, Ten Minutes in Hell, is really a great read. If you didn’t get the genre by the cover or the title: it’s horror. But in an unconventional way that I wasn’t familiar with, but I loved it.
Ten Minutes in Hell includes ten very different stories exploring how characters from different cultures and backgrounds live, die, and yes, go to the other place. From ancient Egypt, to Hollywood, and even the Church of Satan, there’s a fun, twisted story to suit all tastes. I imagine a good bit of research went into understanding how different cultures view death and a negative end to human existence, some of which are truly horrifying. The characters themselves are equally horrific, some being murders, abusers, thieves, and the truly wickedest among us.
I found the most terrifying story to be about two miners—boss and worker—who die in the same explosion. Just when you thought you understood who was going to heaven and who to hell, the weight of a person’s heart is put on display, and the heaviest heart leads to the worst fate I can imagine: being eaten by the great monster Ammit and blinking out of existence. Loved ones even forget you existed. This idea of hell is worse than my idea of death.
But there are stories in this complication that also explore other ideas of hell. For example, a very sweet story right in the middle of the books explores the life of a good person. You’d think she’d go to heaven, having been a nurse and helping people all her life. But even good people die. And yes, she went to hell. But it wasn’t her punishment. It was her choice. She chose to go to hell in order to help those suffering there heal and eventually move on to a higher plane of existence. This was her sacrifice to continue her good work, even after death. Other stories explore how people remain in hell because they haven’t quite figured out how to not be there; they’re trapped by their actions, their inability to see they’ve shackled themselves. But I won’t spoil it for you and give all the details away.
The most curious thing about this collection is how well the author explores the human experience and how shitty human beings can really be. It makes you think about your own actions, your thoughts, and how everything you do as a person has a direct affect on other people, even things that in retrospect feel mundane, and even things you’ve been forgiven for.
The last story in the book is about a surprising character. The character is greeted by Saint Peter at the golden gates of eternity. But we learn that perhaps we don't know as much as we thought about the nature of “God” and “the rules” and “how it all works.” We know shit. In Mr. Ganzer’s tale, this is made very clear. Maybe we've got it all wrong.
This last story struck a very hard chord in me. I was raised Catholic and I admit I suffer some intense Catholic guilt. Ingrained in me are ideas of right and wrong, good and evil, and how things are because of a 2,000 year old storybook. But Man is fallible. Always.
I would highly recommend this book to those who enjoy thinking outside of the normal perspective of good and evil, and society at large. It’s only when we understand we know nothing that we can face reality.
I’d also recommend the sister book in J. Thomas Ganzer’s collection: Ten Minutes to Kill, exploring ten short stories of murder. Just like Ten Minutes in Hell, it packs a punch.

To Enter: Answer the question in the blog comments and include your Twitter handle (@Your Name) or email address. Three winners will be chosen by author at random, receiving an eBook copy of Ten Minutes In Hell. Contest begins May 4th, 2021, and ends May 10th. Good luck! 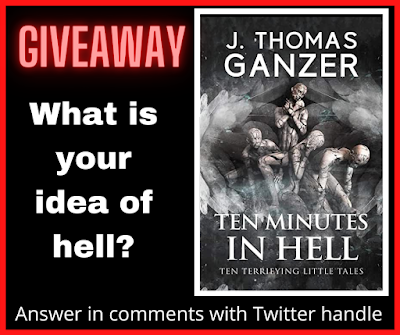 Exclusive Excerpt:
Here is a small excerpt from the author's favorite story, Dante's Fourth Circle of Hell. Both characters were in love with money: One loved to spend it, the other to save it. A hedonist and a miser, both with the means to help others, choose to think only, rewarded with their just desserts.
Virgil and Luther entered the void to find themselves dropped into a large stone pit with many beings like them milling about. Luther subconsciously adjusted the watchband on his Rolex, he was allowed to keep that and whatever else he had on him when he arrived. Virgil still clutched his briefcase to his breast, that was his treasure. But these things were more like anchors tethering them to this plane of existence, which is a lesson they would have to learn, if they could. Many never learn. Ever.
The several dozen souls in the pit took little note of the new arrivals, they eyed one another with suspicion and envy. All had cases and purses and bags containing items that were unique to each soul. Pluto guided the two to the edge of the pit and spoke in a hushed tone.
“This is where you will reside until such time as you reside somewhere else. You may use the things you have with you to barter for other things. Or not, you may wish to do nothing. There are things you may want to acquire, or there may be things with which you do not want to part. Trading begins soon, best of luck to you both. I hope you find what you are looking for.”
Dante described his Fourth Circle of Hell as a dark place where two classes of greedy souls fight one another for wealth—members of one group committed the sin of spending, the other of saving, though all are guilty of avarice. He would marvel at this eternal display of greed, watching for a sign of awareness, just one soul who could recognize the pettiness, the pointlessness of it all. None did.
The two men meandered about, eyeing one another and the rest of the attendees. At once, a deep, booming bell rang, and a frenzy of activity followed. All began yelling at one another, demanding deals or outright refusing to trade. The souls were barking and spitting at one another until they all descended into a cacophony of voices demanding satisfaction. Soon, they split into two groups: the spenders and the savers. Virgil and Luther quickly split and joined the group most befitting them, and their voices joined the chorus.

Interview With The Author

Q:What inspired you to write a story collection about Hell?
A: It hit me like a real epiphany. I wanted to write another horror short story collection, and I wanted to do something that hasn’t been done before. I thought about imagining hell, then I realized hell has a thousand different iterations through literature. So why not imagine people being confronted with their own personal hell, but the hell as imagined by Dante? Or the ancient Egyptians? Once I started, I couldn’t stop writing.

Q: Does your own personal belief structure play a role in your writing?
A: I tried not to let my own beliefs interfere with the story. I have my own thoughts on life, death, and what, if anything, comes next. But there are so many people who have a particular view on what hell is, I like to think that every reader can connect with at least one story.

Q: What kind of research went into writing your book?
A: Ugh, lots of research. I had to explore hell as considered by different cultures. But if most stories of hell include your basic fire and brimstone, lava and torture, that setting only gets me one story, I needed nine more. After a while, it became difficult to find ten distinct views of hell and final judgment and the afterlife.

Q: What kind of reactions are you hoping to get from your readers?
A: One of my beta readers told me she couldn’t sleep and had to confront her own faith’s view of hell after reading the book. As an author of a horror collection, that’s truly high praise. Knowing it was more than just a silly little story, but something that resonated to that degree, put me over the moon!

Q: Which story in your collection is most important to you and why?
A: I loved writing the story called Dante’s Fourth Circle of Hell. It’s about two filthy rich wall street guys, one is a hoarder of cash to the point of being a miser, the other can’t spend it fast enough on hedonistic pleasures. And, like most of the stories and legends of hell told across time, they have the key to the jailhouse door but won’t open it to escape. As bad as their hell is, they don’t want to leave because they love the money more than eternal happiness.

Q: If you died and went to hell tomorrow, what do you think would be waiting for you?
A: Oh wow, good question. You’re stumping me, Gora. I think my personal hell would be the absence of intellectual stimulation. I would be Sisyphus, doomed to perform the same mundane task over and over for all eternity.

Q: What's next on your writing agenda?

A: I have a novel “in the can,” but it needs a whole lot of editing. It is a legal thriller about a law professor chasing the brass ring of tenure when he is struck by a brilliant research idea. He enlists two law students to assist him in developing this idea, but things take a dark turn when his little project crosses the line from unethical to deadly. And I love my twist endings so we’ll see if this one holds up!

Find this author online on Twitter or check out all this books on his Amazon Author Page
Happy Reading! 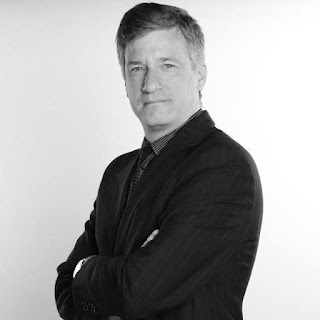 Posted by Angora Shade at 4:23 AM No comments: