Here's a little about her story: Elevator Confidential 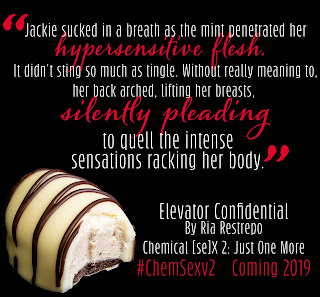 Trapped in an elevator with her secret crush and some aphrodisiac chocolates, Jackie's bad day turns delicious. Walden may be her father's friend and business partner, but how much temptation can he endure before succumbing to both their forbidden desires? What happens between them is dirty, decadent, and strictly confidential. 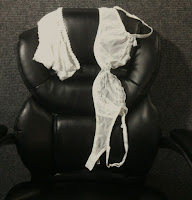 Ria Restrepo may appear to be a mild-mannered bookworm who drinks too much coffee and spends most days tapping away on her computer. But beneath the quiet exterior lurks a filthy-minded sex kitten with a lurid and lascivious imagination. Writing romance, erotica, and all the shades in between, she truly enjoys entertaining readers with stories about strong women exploring and celebrating their desires—especially when they involve alpha males with a sensitive side.

Ever wonder what it's like to take part in an anthology like this? Here's what Ria had to say about the journey:

Sometime later, Oleander hosted a contest using a rather bizarre list of writing prompts. If there's one thing readers should know about me is that I love a good challenge. I took the prompt "hot sex in a rickshaw" and entered a story called "Rickshawing with Rick and Shawn." I didn't win, but Oleander loved all the entries so much an anthology called Prompted was planned. Sadly, that never came to fruition.

A couple of years later, after I emerged from a brief hiatus, Oleander invited me to contribute a story to Chemical [se]X Volume 2. I was truly honored that she and the Sisters in Smut wanted to include me. It's quite a thrill to be asked to write a story for an anthology—especially for one I admired as much as Chemical [se]X. No pressure, right?

Although I quickly agreed to write a story of Chemical [se]X Volume 2, I was more than a little concerned that I'd be able to write a made-to-order story. Even if a story is intended for a particular call for submissions, I usually write as inspiration hits me, then keep my fingers crossed that it's accepted. This time, my muse had to perform on command. Thankfully, I had some time to make the magic happen.

I've been published in two other anthologies as Ria Restrepo and I'm seriously impressed with the Chemical [se]X Volume 2 contributors. Not only are they incredibly talented, but I've never worked with a more supportive group of women. Everyone is so generous about sharing each other's work apart from our Chemical [se]X stories. I know I've made some great new friends and we'll be there for each other long after Chemical [se]X Volume 2 is published. That's a rare and special thing in this industry.

"Eminent Domain" in The Sexy Librarian's Dirty 30 Volume 3
Posted by Angora Shade at 12:39 AM