Today we hear directly from the author about this decadent story!

Hear what others are saying about this book! 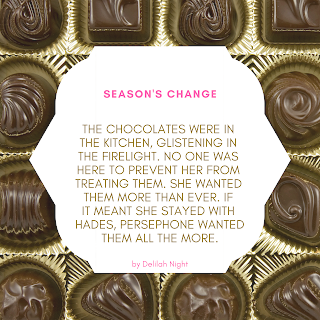 I have always been a big fan of Greek Mythology. I have read a lot of Greek Gods themed fiction, and I’ve toyed with the idea of writing my take on a myth, but I kept hesitating. Sometimes when you love something so much, you get intimidated.

When Oleander reached out to me about Chemical Sex 2, I jumped at the opportunity to write for the series. The first book nearly made me orgasm on an escalator (and is why I’m hesitant to read erotica out in the wide world these days), and I wanted to bring my A game to the book.

My story, Season’s Change is my take on the Hades and Persephone myth. Years ago, I heard a recording of a song called Persephone by a group called Escape Key. The lyric “They all forget I had a choice, y’know/I could have chosen not to eat or drink,” really spoke to me, and is the foundation upon which I built Season’s Change. I reached out to Michelle Dockrey, the lyricist, and she gave me permission to use the song. I had originally envisioned as a BDSM story because of a few of the lyrics, and the first draft was in that vein, but it wasn’t very me. The result is a tale of true love and trust built over time until Persephone makes the deliberate choice to stay with Hades. 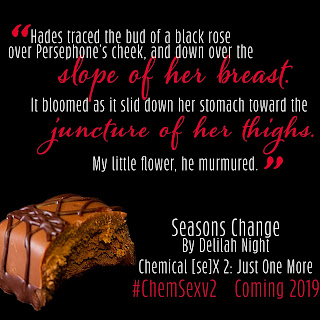 I enjoyed playing around with these archetype characters, and when I take a breath from my ongoing projects, I am leaning towards writing more myths. I liked the idea of a benevolent Hades—he created not just Tartarus, but also the Elysian Fields. I wanted a Persephone with some agency—in many takes on the story, she’s a passive object that is kidnapped and then returned to her mother, but in mine she has choices. I also enjoyed writing a little cameo from Zeus, where he comes off as the pussy hound dudebro we all know he is. I mean, seriously, as a Tumblr post I once read says all of Greek Mythology can be summed up as ‘don’t put your dick in it, Zeus’ and Zeus ignoring them and putting his dick in it anyways. Demeter is mentioned, but not featured, although I picture her as a particularly tightly wound helicopter mom/stage mom type. I especially loved writing each of Cerberus’s head’s personalities. I can see why some other authors have had their Cerberus’s talk.

I will confess I immediately thought of Hades and Persephone because eating something is a major plot point in the myth. Pomegranate becomes a chocolate bonbon with pomegranate filling. So the story leant itself to the theme of the anthology in an organic way that wouldn’t come across as forced or shoehorned in. The first anthology was so strong that I didn’t want to let anyone down. 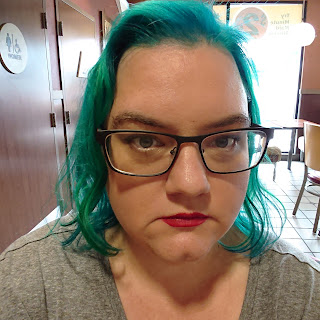 Be my friend on Goodreads

Check out my Amazon author page