The creative Sally Bend is a contributor to Oleander Plume's Chemical se[X] Volume 2
Here's a little about her story: Vanilla Frosting 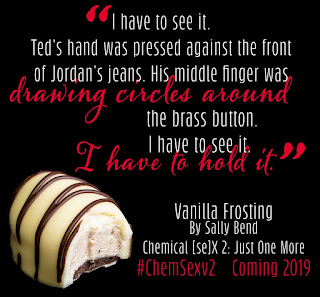 Ted isn’t gay. He can’t be gay. It’s simply not possible. Not proper. Everyone told him so.


But what if they’re wrong?

His new roommate would like very much for him to be gay. He even has a secret plan to help him realize his deepest, darkest, sweetest desires. They say chocolate is the way to the heart, but it may very well lead somewhere else as well.


What's it like to be a writer and take part in an anthology like Chemical se[X]? Here's what Sally Bend had to say:

Q: How did you become involved in writing for the Chemical se[X] Volume 2 Anthology?

Oleander and I met through my review of Horatio’s book and we instantly struck up a friendship. We talked, we interviewed one another, we guest posted, and then she invited me to become a Sister in Smut . . . and the rest is history.

I was flattered and delighted when she invited me to join Chemical [se]X Volume 2. I had no idea where it would lead me and didn’t set out to do any sort of homage or tribute, but when my muse demanded I try my hand at a M/M story, I knew Oleander would approve."

Q: How did you feel about this anthology's theme of aphrodisiac chocolates?


A: "The idea of aphrodisiac chocolates was a tasty one, but it wasn’t until I went back and ready the first Chemical [se]X Volume that I realized how much potential there was in the concept. Reading it, I found myself drawn to the stories where chocolate was more than just an aphrodisiac, where it helped lovers overcome their inhibitions and discover themselves."

Q: How did you create a story to fit this anthology's theme?

A: "You know, it’s funny. I had a carefully constructed story all laid out. I knew the characters, the setting, and the plot. It was the kind of story I felt readers would expect of me. It was fun, and it was safe.

And then this day dream came out of nowhere. I saw these two roommates, with plenty of sexual tension between them, and I watched the entire story play out in my head. I knew, right then and there, that it had to be my story, no matter how challenging it was to write."

Q: Chemical se[X] is led by Oleander Plume and the Sisters in Smut. How has working in this all female-led collection impacted you?

A: "I am in awe of the talent assembled for Chemical [se]X Volume 2. I mean, seriously, look at that lineup! I am humbled to be a part of it, and I am ridiculously excited to see what everyone comes up with. I know some of the ladies very well – my fellow Sisters in Smut – and I’m getting to know everyone else as we all join forces to support and promote each other. This is not just an anthology, it’s become a community." 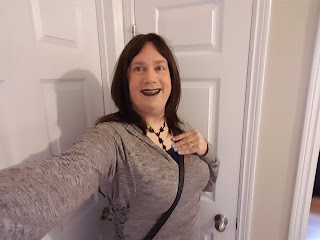 
Sally Bend is a queer reviewer, editor, and author of LGBTQIA books. Although shy and polite (she is, after all, Canadian), she loves the bold and boisterous expression of stories that bend the binaries of gender and sexuality.