Chemical [se]X 2: Just One More, is the second volume of the Chemical [se]X series. Chemical [se]X Volume 1 released in summer 2016 with a talented array of 13 authors, all writing stories about one of our favorite things: chocolate! And what goes together better than sex & chocolate? Readers had nothing but good things to say about it.

***** "...scrumptious collection of wicked delights with something for just about every prurient taste." 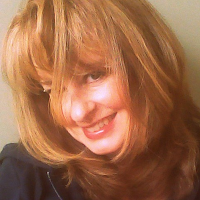 Who started it all? Oleander Plume. She writes mostly gay erotica and has been published in numerous anthologies and texts of her own, including the Best Women's Erotica and Bondage Bites anthologies, and her own tantalizing creation, Horatio Slice. Find more about her on Amazon, her blog, and Twitter.

BUT WHAT ABOUT CHEMICAL [se]X VOLUME 2?

Apart from being asked to write a story for Chemical [se]X Volume 2, I wanted to get down to the nuts and bolts of this series, hearing directly from the creator herself.

Q: Where did your original story for the Chemical [se]X anthology come from?

When writing for a submission call, I typically let the theme roll around in my head for a bit, then start typing whatever idea pops up, no matter how ridiculous. (Incidentally, my novel Horatio Slice: Guitar Slayer of the Universe started out as a short story submission.) Once I have a dozen or so ideas, I pick one and begin to write.

That day, “two scientists create a recipe for aphrodisiac truffles with sexy results” won out, and “Chemical [se]X” was born. As clever as I thought the piece was, it was rejected by the editor. Instead of banishing it to my reject folder, I posted it on my blog in the “free reads” section. To my surprise, everyone loved it, and it became my most read post of all time.

Q: What made you decide to create an anthology based on your original short story?

I planned to write a sequel to the original story and post it on my blog as a thank you to my readers, but the plan took on a life of its own and evolved into an anthology.

Q: How did you decide which authors to work with for the first volume, 2nd volume?

For both volumes, I asked writers I admired to contribute.


Q: How are you able to keep stories based on the same theme original and fresh? Did you set specific rules?

Since the theme of aphrodisiac chocolates is very specific, I kept the other parameters loose. Any gender pairing. Any genre. Any setting. Of course, I wanted the stories to be sex positive and feature consent, but everything else was up to the writer’s discretion.

I think this formula is the secret to success and why I didn’t end up with cookie cutter stories in either volume.

Q: What's the best/worst part of working with multiple authors?

Working with multiple authors can be tricky, but when you pick people you feel you can work with, things go very smoothly.

The worst part? Aside from keeping track of who is doing what, I can’t think of anything.

Q: What are the best/worst parts of forming an anthology? 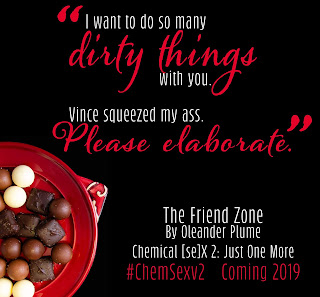 The best part is reading all the contributions and being completely knocked out by the writers’ originality!

The worst part? All the legal details. Contracts, getting an ISBN number, etc.

Luckily for me, I had a lot of help. Volume 1 was a coop of sorts, and volume 2 is no different. Each writer contributes to promotion, planning, and publication.

Q: Your opening story in Volume 2 is called "The Friend Zone" Where did the inspiration for this story come from?

As usual, I type out any ideas that come to mind, and go with the one I feel most positive about. I knew I wanted a friends to lovers trope, and also a few details about the chocolates to properly set up the rest of the stories.

I considered another story featuring Jane and Wyatt from the original piece but because if felt like I was trying to write the same story twice. I got bored quickly and gave up.

Q: How are you able to keep your stories sex positive? 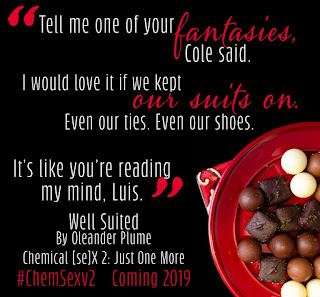 Sex positive can mean something different to everyone, but to me, it’s all about respecting the characters you have created. If you think of the players in your story as real people you care about, wonderful things will evolve.

Q: Do you believe the chocolates in Chemical Sex give the eater their desire or rather awaken what was already there?

I like to think they awaken what is already there. I also like to think the chocolates bring out the best in the people who eat them. Heightened senses along with a heightened sense of respect and self-awareness. Maybe they give the user a better idea of what they desire, and in doing so, a better idea of how to communicate that desire to their partner. 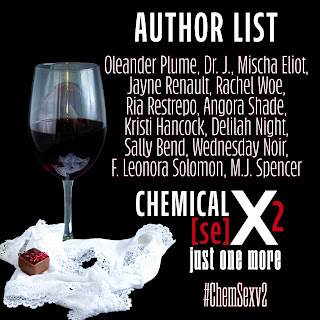