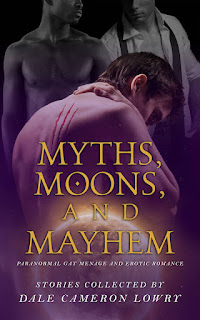 Myths, moons, and mayhem make the perfect threesome—and so do the men in this anthology.

Penned by favorite authors such as Rob Rosen and Clare London, as well as by newcomers to the genre, Myths, Moons & Mayhem is an eclectic mix of paranormal lust and polymythic beings that will spark your fantasies and fuel your bonfires.

Inside Man by Clare London—At a London pub, a tear in the veil between the dead and living opens up new possibilities for a ghost who could only ever watch the men he desired, but never touch.

The Secret of the Golden Cup by Rebecca Buchanan—A classics professor finds himself at the center of a magical war. With an unfairly attractive student and a campus janitor as his only allies, can he stave off the forces of evil?

When The Big Moon Shines by Carl Redlum—A college student is intent on hunting down the man who turned him into a werewolf. But his mouthwatering neighbors keep getting in the way.

Careful What You Wish For by Elizabeth Coldwell—Josh dreams of meeting Mr. Right, so his roommate offers help with a love spell. Neither man is prepared for what happens when the spell begins to work.

The Cave by Dale Cameron Lowry—Losing sleep to the sounds of his tent-neighbors’ nightly lovemaking has nature photographer Ethan at his wit’s end. What kind of magic can convince the two men he should join them?

The Endless Knot by Morgan Elektra—The fiery romance between a vampire and a werewolf threatens to burn itself to the ground until a human teaches them to temper the flame.

Squatchin’ by Greg Kosebjorn—Two Bigfoot hunters get more than they bargained for when they set out on an overnight camping trip to trail the legendary beast.

Celyn’s Tale by Rhidian Brenig Jones—A young Welsh farmer is haunted by visions of his future lover, only to discover that the lover is not one, but two—and not exactly human, either.

Close Encounter of the Three-way Kind by Rob Rosen—In this quirky comedy, aliens arrive from another galaxy, but they’re more interested in consensual exploration than invasion. Alien probing never felt so good!

Excerpt from "Inside Man" by Clare London:

I haven’t had the luxury of a cock in hand for a long, long time.

Not my own, and not anyone else’s. Because that’s what happens when you snuff it. The loss of corporeal touch, that is. You get used to it over time, believe me—those early days of stepping through the back of a sofa, grabbing for a handhold when you fall and watching your arm just pass through a decoupaged coffee table; they’re thankfully in the past—but that doesn’t mean I don’t miss it.

You know what I mean, right? There are times when sexual need is a pure, unadulterated agony, when the desire is as mentally strong as ever, but the limbs won’t respond. Times when I’d give up all the new benefits—you know, sharper hearing, no need to buy a train ticket, free front seats at the gig of my choice, and the chance to see what politicians are really doing behind closed doors with their expense accounts—just for the chance to feel my own junk again. To scratch my pubes. To fold my palm around my dick and feel the sheath crinkle and stretch. To reach a finger down to nudge my balls. To sigh with the cleanest, simplest pleasure of all, of satisfying myself.

And one of those times is right fucking now, watching these two guys together.

They’re a gorgeous couple: not model material, or that overgroomed, city trader look. They’re just young, living life, naturally good-looking, and… really fine. Just over an hour ago, they came into this bar on Blackfriars Bridge, at the end of a long, languidly hot London day. The place is packed with tourists eating overpriced snacks while fanning themselves frantically with their A–Z maps, kids whining because the signal for their phones is unreliable, and city workers who’ve discarded their jackets and ties, surrendering to the damp clamminess of their shirts, and are gulping sauvignon blanc like it’s water. It’s Friday, the end of the working week.

This is one of my favourite places: you see a huge cross-section of humanity here, whatever time of day or night I visit. Which, let’s face it, is all much the same to me.

These guys are now sitting at a corner table, sheltered from the crowds at the bar, their heads leaning toward each other, almost touching, but not quite. There’s a tangible spark between them. I see it in the way each one’s gaze is fixed on the other; the way their fingers brushed together when Guy #1 passed a pint over to Guy #2. Yet they’re discreet. No embraces, no caresses. Maybe they’re not out to their workmates. Maybe they’re just modest in public. But the familiarity I see between them implies they’ve been a couple for a while.

Guy #1 is on the left, the taller of the two, even sitting down, with a shallow buzz cut of black hair, a neat beard, and bronzed forearms. He’s in a tailored suit, his shirtsleeves rolled up against the heat, the front of his crisp white shirt a little creased over a stocky torso. His shoes are pinching—I can tell by the way he’s stuck his feet out from under the table and is rubbing one against the other—and his shoulder muscles are tight with tension.

If I still had my touch, I could massage it away. I used to be bloody good at that.

Guy #2 is on the right. He’s younger, with plenty of upper body muscle but slimmer hips and legs, and shaggy hair half scooped up under his beanie. He’s dressed more casually in jeans and a polo shirt, his hands coarser, his boots dirty from brick dust and long-ingrained paint. He’s more relaxed than his partner, but bolder too. How can I know that? I can’t always explain how I do. For now, it’s something about the easy way he’s stretched out his legs under the table, the fact that he seems restless sitting down, and restricted by the limited space in the pub. His smile is quick to appear, though it’s quenched as swiftly. His hand darts across the table top, as if to grasp the other guy’s, but stalls somewhere behind the menu holder, cradling the salt cellar instead.

Perhaps he knows the touch isn’t welcomed. His frown tells me he’s not pleased about it.

What’s the problem between them?

Has it just been a shitty day at work? Have they argued? I shift, as much as my postlife movement can be measured by human terms, and examine those expressions more closely. Guy #1 is angry; tense. But despite that, he adores Guy #2, he wants him like breath. That’s very clear to me—many times I can sense emotions as keenly as I used to savour the smoke from a particularly fine cigar—but there’s something holding him back. His most honest desire? It’s to drag Guy #2 into the gents, find a lockable cubicle, and drop to his knees in front of him.

Dale Cameron Lowry’s number one goal in life is getting the cat to stop eating dish towels; number two is to write things that bring people joy. Dale is the author of Falling Hard: Stories of Men in Love and a contributor to more than a dozen anthologies. Find out more at dalecameronlowry.com, or contact Dale at mmm@dalecameronlowry.com.