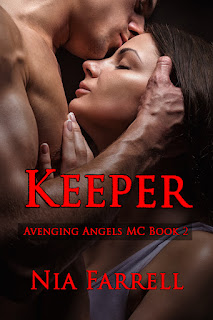 Luke “Mad Dog” McLanahan and Isabella Castellari have a history. Kind of. He’s a member of the Avenging Angels MC and one of four brothers whom she thinks slept with her sister three years ago. Or did they? Nothing is as it seems. Isabella’s world is turned upside down when lies are exposed, truths revealed, and the man she’s been fantasizing about for three long years makes her an offer that she should refuse but can’t.

When Mad Dog recognizes Isabella stranded on a rural country road, remembering her toxic sister, he almost doesn't stop. Seeing her as an end to a means, he brings her back to the Avenging Angels MC clubhouse and quickly learns that she's different—very different—than what he expected. She's a curious innocent, and willing to submit to his domination. But there are complications. A mob boss uncle, protective parents, a traitorous friend, and secrets that have been kept for far too long. Secrets that will either bind them together or tear them apart.

This book has adult content and may contain triggers. Written for ages 18+. 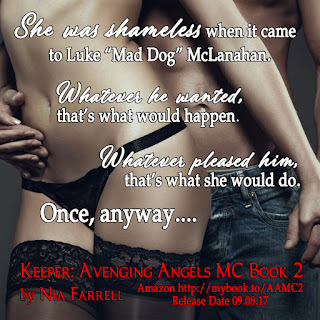 He couldn’t deny, it was a huge ego stroke to know that he was her first. But she was also Isabella Fucking Castellari. Never Miss Little Italy like her sister, but they shared the same blood ties to the fucking mob.

Of course, Isabella didn’t know that he knew about her crime family connection. He’d been keeping too many fucking secrets for too fucking long. Her sister Krissy and her Uncle Giovanni were just some of many.

Rather than open that can of worms, he chose a safer subject.

“So, tell me.” Reaching, he smoothed her hair back from her face and traced the line of her jaw with two fingers. “Before tonight, did you know that Anna was seeing Richie?”

She sighed softly. “No. I mean, I thought that she was seeing someone, but she always had an excuse. Usually, it was homework, but then we graduated and she was still too busy.”

Mad Dog forced his voice to stay calm. “How old are you, Isabella?” Please tell me you’re not jail bait on top of a mob boss’s niece.

“I turned eighteen on March sixth. Michelangelo’s birthday. And the day the Alamo fell, if you’re into Texas history. How old are you?”

“Thirty.” Twelve years her senior. He rubbed a hand across his face and blew out softly. “Jesus, that sounds old.”

Reaching across, she caught his dog tags, weighed them in her hand, and said solemnly, “You’re not old. You’re experienced. And I’m hoping that you’ll teach me.”

“Well, fuck that shit. That’s not how things are done. You want to learn? We’ll get cleaned up and go downstairs. The lounge is your classroom. You’ll learn things there that they don’t teach in college. Are you signed up to go anywhere this fall?”

“SIU,” she said. “For photography and graphic design.”

He remembered the point-and-shoot he’d found in her purse. “You a shutterbug?”

“You could say that. I took my first picture when I was four. Got my own camera when I was six. I never leave home without one.”

“And the graphic design?”

“You know all those books on my reader? Someone does the covers. Might as well be me. Take the pictures, offer premades and customs. It’s something that I think I’d enjoy and be good at. I’ve already done one for my cousin. She uses a pen name so that no one knows she writes erotica. She tells people that she’s a ghost writer and can’t disclose anything.”

“She had you do a cover? Like, with models? Naked models?”

Isabella bit her lip and coiled a strand of hair around her finger. “Well, it is erotica,” she said coyly.

He wasn’t smiling. She was eighteen, for Christ’s sake. What the hell was her cousin thinking?

“Just teasing!” She traced his lips with the pad of her index finger. He caught it between his teeth and refused to give it back until her eyes had gone smoky and her thoughts were disjointed. “She, um…” Isabella cleared her throat and tried again. “She dressed up like a cheerleader. The cover shows her chest and midriff. You…um…you can’t see her face.”

“I would.” If they were going to try and make a go of this, he needed to know what she was doing. What she had planned. Then he’d expand her horizons where he could.

“And the graphic design—apart from the book covers. Can you draw?”

Her brow scrunched. “Yes? Some? That’s not my—”

“Sweet. You could learn to tattoo.”

“Wait. What?” She looked at him, confused. He’d gone too fast and lost her. Now she was trying to get her bearings.

He shifted gears. “How about a summer job? You working anywhere?”

“No. I’m taking two online classes. Getting some of the required subjects taken care of so that I can immerse myself in the good stuff come fall.”

“The club owns a tat shop. Angel Ink. Flynn will need to see what you can do, but if you pass muster and want a full- or part-time job, he can use the help. Front desk scheduling, answering the phone, checking in deliveries. Normal receptionist-office assistant stuff. He can teach you on the side, if you want to learn. Never hurts to learn another job skill, just in case the market for photography tanks, no one’s hiring graphic designers, and your cousin can’t afford what you’re worth.”

That last bit seemed to perk her up. “How do you know what I’m worth?” she challenged. “My professors might think that I suck.”

He begged to differ. “As your teacher, I would say that your oral skills need developed, but the student shows promise. Think you’re ready for your next lesson?”

Mad Dog caught her hand and wrapped her fingers around his half-hard shaft. “Just a hint. The correct answer is yes….” 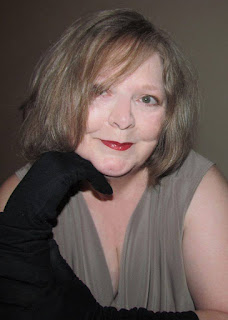 Her debut books from The Three Graces Series (Something Else, Something Different, and Something More) are kink with a paranormal twist. Soul mates, reincarnation, karmic fallout, shamanism, and psychic abilities come into play. Personal experience and extensive research go into crafting her characters, but it's her sense of whimsy that has made fictional Posey, Minnesota, the ménage capital of the United States with a Monty-Python-themed diner that's central to the plotlines.