Welcome fellow author Sheri Velarde! She has a wonderful new story to tell in "Stealing Hearts". Let's here a little about it. 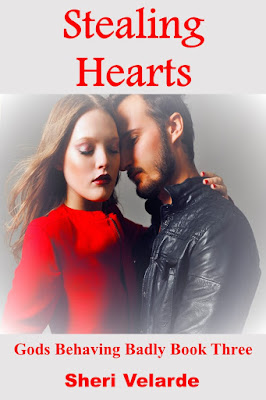 Sophia had fled New York and the feelings that a certain detective had stirred within her. Now she found herself alone in LA on New Year’s Eve, the former goddess of love reduced to having to look for a date. Hitting the Sunset Strip she finds the last thing she was looking for, but exactly who she was yearning for, Detective Bruce Stoker in the flesh. A night of passion leaves her with high hopes for the future, until an art heist threatens everything.

Bruce had followed Sophia across the country in order to rekindle the passion he felt during their one night together and to get some much needed answers from her about who he really was, what her really was. Just when he thought he would get his answers, Bruce begins to wonder if he can truly trust Sophia at all. Only time and a mystery will tell.

When I decided to try my hand at an actual book series, the first idea that popped into my mind was that it should be about Greek gods. That is where the idea for the Gods Behaving Badly series started. People since then have asked me why Greek gods? Why not? Not only are there plenty of gods to choose from, which means lots of potential characters for a book series, but they are fascinating to me. I believe that you should write what you know and love, so ancient gods from mythology just made me want to write them. Plus let’s face it, all those overgrown personalities make for some pretty good fiction! Talk about drama! For my own personal deities of lore stories I chose to place them in modern times with diminished powers. Same egos, but more challenges. So far I am liking the results. Looted, the first in the series was pretty well received and I am hoping Stealing Hearts does just as well. I am loving writing this series and in the latest book have already brought in more gods and that means more stories to tell. Here is a little sneak peak from Stealing Hearts.

Sheri Velarde lives in New Mexico with her husband and their two dogs.

Being an avid reader since an early age, she has wanted to be a writer for as long as she can remember. She has been writing all her life, but only recently started to actually try to pursue her dream of writing for a living. She specializes in all things paranormal and that go bump in the night. Her heart truly lies in exploring unknown worlds or adding the supernatural to our world. If it goes bump in the night or has magical connotations, Sheri writes about it.

She is constantly putting out new material with various publishers, so it is best to keep up with her on her website www.sherivelarde.weebly.com.

The next morning Bruce awoke feeling happier than he could ever recall feeling. Suddenly he snapped open his eyes to make sure that Sophia still lay beside him. Sure enough, she slept peacefully next to him, a slight smile played on her beautiful features, her long auburn hair mussed, making her even sexier. Thank god, or goddess in this case. He had been afraid she’d disappear despite her promise the night before. Now that his need for her had been abated ever so slightly, maybe he could get her to answer some questions that had been eating him alive since their first meeting. His stomach growled; he forgot when his last meal had been and he had certainly worked up an appetite the previous evening. Quietly, he slipped out of bed, praying that goddesses kept a fully stocked kitchen. Maybe a little breakfast in bed would make her more talkative about the magic she seemed to have awakened within him. He still needed to know what an empath truly was, what he truly was, and what he was capable of doing. It seemed too farfetched to believe he was anything but human. However, he certainly felt different when with Sophia.

Making it to the kitchen, he was thrilled to see Sophia had all the makings for a fine breakfast. He turned on the small television on the counter as he began to get the eggs and bacon ready to cook. Mostly, he just wanted a little noise as he got to work, but something suddenly caught his attention.

“This is the highest profile art heist to hit Los Angeles in history. What is even more puzzling, there is no evidence as to who could have stolen the painting. All cameras and security systems are working properly, and the guards on duty didn’t see or hear anything. No alarms sounded, and the Getty’s systems show that no one entered or exited the premises last night. Van Gogh’s Irises is valued at over fifty-five million dollars, but many consider it priceless. If you have any information please contact the police. This is certainly not how we wanted to start off the New Year…”

Bruce’s heart sank. As he lay asleep last night, exhausted by lovemaking, it appeared Sophia may have been up to her old tricks. How could he ever learn to truly trust a creature such as her? She seemed to be getting bolder too, now she wasn’t just stealing from nefarious rich men, but from the Getty Center, and a high profile piece as well. He must not have provided her with enough excitement last night after all. 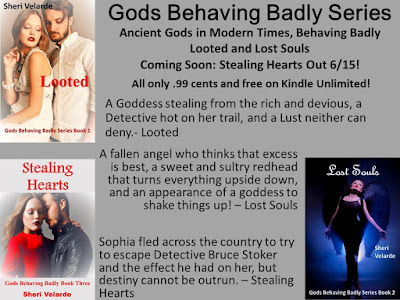