Story a Day May Challenge 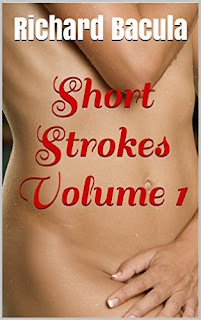 You can see all of his work here on his Amazon author page.

As an author, I know how difficult it is to sit down and write each day, let alone finish a project. Personally, I have multiple projects going at once, and they all want attention! I've recently learned that Richard Baucla intends to continue with his May Challenge in 2016. I sat down to interview Richard Bacula to find out more about his project and his motives.

Q: What inspired you to begin your "Story a Day in May Challenge" ?

Bacula: The phrase “A Story A Day In May” just popped into my head. At first, I thought that I’d thought of it all on my own, but later I found out that there’s a website dedicated to the idea: http://storyaday.org. So I must have heard the concept somewhere and adopted it. Or I made it up on my own, but somebody else made it up on their own first. Either way, the idea got into my head, and I decided to go for it. With the website, they don’t have any minimum or maximum word count, so somebody could write a one-sentence story and call it a day. I picked the range of 700-2,500 words, so I had to do at least 700 words per day. Usually I was closer to the maximum count.

Q: What are the specific rules you set for yourself for the stories you write for your May Challenge?

Bacula: My only goal other than word count is to write something each day that I can call a story with good conscience. It can’t be a chapter in a larger work. It can’t be a poem. It can’t be plotless, characterless sex. But there does have to be sex. I’m an erotica writer after all, and sex is my reason for writing.

Q: We all suffer from distractions. How were you able to stay focused on your goal in your first May Challenge?

Bacula: lol. I’m desperately trying to remember how in time for this year’s challenge! Mostly, it's just a matter of prioritization. I’d wake up early if I had to, or go to bed late, or go to bed early and wake up in the middle of the night to write. I cut back on my already limited social activities, and I just made it my absolute top priority to do one story every day. This year, I’m even busier than last year, and I’ve set my intended word count at 2,500 words minimum! I’m not sure if I’ll be able to make it, but the way to improve is to test your limits and to push yourself to do things that you’ve never done before.

Q: What has been the most challenging aspect of writing a story every day for a whole month?

Bacula: The main challenge was just finding the time and energy. The second most challenging aspect came in toward the end of May, when I started to get really, really tired of describing orgasms! I ran the spectrum of the usual metaphors: this one was like being hit by lightning, this one was like a volcano, this one was like an explosion, this one was like a deluge, this one was like an earthquake.... Toward the end, I remember thinking, “Then they had an orgasm. You know what that’s like, don’t you reader? Why do you need me to explain it?!” But, of course, explanation and description is a writer’s job--we use words to create images and sensations in the reader, and with erotica the orgasm is one of the most important parts. So I persevered and managed to get it all done.


Q: Where did your story ideas come from for your May 2015 Challenge? How were you able to keep them fresh & non-repetitive?

Bacula: There are story ideas everywhere. I went to the dentist at one point last May, so I wrote a short story about a dental hygienist. I walked past a women’s restroom and wrote a short story about an incredibly drunken man who thought that the “Women” sign on the door was advertising a sale. I drove past a fire department one day, and came up with a story about a fireman who is mistaken for a male stripper. Ideas are something that have always happened to me, whether I want them to or not. That’s one of the reasons why I write--to purge some of the ideas out of my brain. The May challenge turned out to be a very good way to do that!


Q: What happened after you finished your May 2015 challenge? What did you learn about your writing? 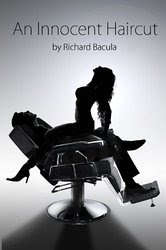 Bacula: After the challenge, I didn’t write anything else for a month because the writing part of my brain was exhausted. When I did start writing again, my skills had improved. Practice does that! The biggest area of improvement for me was that I grew significantly better at brevity.  When I write especially about sex, I tend to go into incredible detail. For the first erotic short story that I ever wrote, “An Innocent Haircut,” I just wanted to write a simple, short sex scene between a man and his female barber. There wasn’t any real plot--just a guy getting seduced--but that story ended up being 9,200 words long!

With the May challenge, I had to finish a short story every day, and I decided to cap the length around 2,500 words, so part of the challenge was working on my succinctness. I started off aiming for 1,200 words or so, and ended up around 2,000+, but as the month wore on and on, I grew a lot better at gauging my word count. There were so many places where I wanted to elaborate on details--physical or mental--but I got better at staying focused and just cranking the story out.

Another thing that I got better at was the ability to fight my own perfectionism. Like many writers, I have any number of projects sitting on a metaphorical shelf in various stages of production, which I have never quite finished because I can’t get the story just right. My perfectionism gets in the way of actually finishing stories at times. I didn’t have that luxury in this case because any real delay in a given story meant that I wouldn’t accomplish my daily goal. Once I picked a plot and started writing, I had to commit to the plot and just keep writing until it was done.

There was at least one case where I had to abandon a story. I was typing away and I realized that I’d gone over 2,700 words, and the sex hadn’t even started yet! I shut it down, saved that file for later, and managed to crank out an entirely different story on that day to make my goal, but it was a bit taxing to do so.

It was a real challenge to shove aside all of my worries, anxieties, and concerns, and to just finish the story:

“Is it good enough?”
Doesn’t matter. Just write.
“Should this character be explored more?”
Maybe later, in a different story. For now, just finish this one.
“Shouldn’t we describe the sex more thoroughly here?”
That would be great, but we don’t have the time or the word count. Just keep moving!
“Will this one even be good enough to publish?”
Don’t care! Just finish it. If it sucks, we can always clean it up later or pitch it out. Just get the damned story finished.

In order to gear myself up for this upcoming May challenge, I’ve been rereading last year’s stories (my “Short Strokes” collection) and there hasn’t been one story yet out of the batch that I’m ashamed to have put my name on. They all turned out pretty good, and it turns out that battling my perfectionism and anxiety every day for 31 days wasn’t just good practice, it also helped me come up with ten new titles (the nine “Short Strokes” mini-compilations, and “Short Strokes: The Complete Collection”) that I’m quite proud of.

Q: Do you have a sneak peek for us for the 2016 Story a Day May Challenge? (story ideas, themes, etc)

Bacula: Last year, I warmed up early by writing a practice story or two before May started. That’s why there are slightly more than 31 stories in the "Short Strokes" series.  This year, I haven’t found the time to do that kind of thing, or I’d share one with you!

One of my goals with this year’s challenge is to expand on my “Serpent’s Gifts” setting, and to that end I’ve decided to write an introduction to the general world. That way, any reader can pick up any story in the setting and have an idea what the world is about without having to have read any of the previous stories. 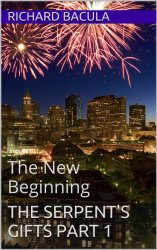 Here’s what I have so far:

It started on December 21, 2012, in the sky over Mexico. Tens of thousands of feet in the air, there was a bright flash of light, and a glowing miles-wide disc of energy appeared. Minutes later, something emerged from the disc: the head of a snake-like creature that nearly filled the portal’s huge diameter.

Humanity took notice, and world-wide panic took place. Airplanes were grounded and the whole planet waited in to see what would happen next.

The seemingly endless Serpent ignored humanity’s attempts at communication and violence, and its flight around the globe was uninterrupted. Eventually, the Serpent reached its destination: the other side of the very portal that it emerged from, and that its massive body was still flowing out of.

When the Serpent’s head touched that glowing disc, there was a blinding flash of fire that covered the entire planet. When the flames disappeared, they took the Serpent and the portal with it, and that was the only thing that they seem to have affected. The rest of the world appeared to be unscathed.

It took some time, but soon the truth started becoming apparent: the Serpent may be gone, but it left something behind. People across the planet started manifesting strange, superhuman powers and abilities that seemed to break the laws of physics.

These abilities soon came to be known as “The Serpent’s Gifts.”
Posted by Angora Shade at 7:53 AM