The project is finally done! 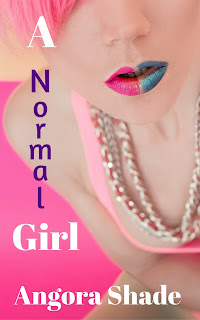 Available on AMAZON and Radish Fiction

Ryan, a geeky technology apprentice student, is determined to lose his virginity. Shy by nature, his lack of experience with women has left him unfamiliar with ideas other than vanilla sex. In his search for his ideal girl, he seeks out those he deems normal, only to be faced with and turned off by their sexual kinks. After failed attempts with two classic beauties, Ryan takes a chance on the oddball, discovering that normal is relative, and that he and his ideal girl are anything but vanilla.

I hate how sex is portrayed in the negative by society, and I hate how so many people misunderstand so much about sex. There's more to sex than traditional missionary for a lousy 10 minutes and you're done! I wrote A Normal Girl with the purpose of dramatizing the stereotypes and misconceptions that society feeds us, and pointing out how clueless many people are to the vast variety of sexual experiences available. What one person considers "normal" is not "normal" for the next person. Some people do fit into the traditional "vanilla" sex life that society tells us is great and acceptable, but there are so many that have had adventures outside the box. And they enjoy them. And that's wonderful and beautiful. Anyway, A Normal Girl shows what happens to Ryan due to his lack of knowledge and communication with who he believes to be "normal". Ryan only discovers his "normal" at the end, after doing everything wrong, humorously teasing the reader by showing how atypical Ryan actually is.

A Normal Girl was reviewed by the fabulous Mindy Book Snitch on her blog where she gave the book 4 out of 5 Stars! She also labeled it in her Top 10 Most Memorable Books of 2015. You can find reviews and info on other great books on her site too!

Andy Sullivan had this to say about A Normal Girl in his 5 Star review on Goodreads: "I love this book! As evident by me finishing in one afternoon. Anyone who enjoys exciting story and an engaging plot will want to check out this sweet confectionery goodness."

Ryan looks up, suddenly startled, to see one of the employees eyeing him over. She’s blonde, slender, and he finds her ridiculously pretty, even in her green, flour-powdered bakery smock, which she wears with a cheeky confidence. Grinning wickedly, she squirts a load of jelly into the center of a sugarcoated doughnut and hands it to him.

Ryan clears his throat. “Yeah, thanks,” he says, as he takes the proffered treat.

He can’t take his eyes off the way her smock draws tight around her delicate waist. He’s forced to as she boldly walks her fingers over his hand holding the doughnut and up his wrist, where she stops and grips him firmly like a mother grasping a small child. His eyes widen as she brings the tip of the jelly syringe to her mouth with her other hand and pulls the trigger, sucking and licking at the tip. Ryan’s stomach falls to the floor, mimicking his chin.

“I just love jelly,” she whispers. Bending over, she pulls his wrist upward toward her mouth, allowing her to take a bite out of his doughnut. She licks her lips as she pulls back and releases him, wiping all traces of loose sugar from her face. Turning and retreating toward the back, she winks and disappears behind a swinging door.

Ryan exhales loudly and adjusts his glasses with a shaky hand as he gazes at the huge bite missing from his doughnut. A glob of red goo, smelling unmistakably of strawberry, begins to ooze down the edge. It’s a slow movement that contrasts starkly with the rapid beating of his heart.

Women rarely speak to him, if at all. Shy by nature, he prefers to sit on the sidelines, observe, and be part of the background that hums and exists in the air of the busy world. Slim and lanky, he knows he fits the nerd stereotype, accentuated by his thick prescription glasses, short professional haircut, and the company lab coat with their well-known logo embroidered over the pocket. Even the pocket protector is his enemy. He knows it sends a lot of women running for the hills when they see it, but it’s part of his uniform. Heaven forbid he should suffer ink stains on the company attire. It would make him look sloppy.

He prefers to be the well-groomed nerd rather than a bad-boy grease monkey anyway, having come to terms with who and what he’d become in life after endless years of teasing through most of his adolescence. His timid personality has left him still a virgin at twenty-two. Average looking with above average intelligence, he’s always known success was in the works for him, if not a lot of hip action. He could deal with that.

Ryan taps his pen against the clipboard in front of him and takes a bite of his doughnut, wondering what possessed her to tease him. Maybe she gets off teasing men. Yeah. That’s it. Play a joke on the geeky guy applying at the bakery and see if you can make him squirt.

Ryan looks down and shakes his head. Too bad she took off so fast. Surely she’d have gotten her jollies seeing the big boner she’d made inside his tight, black, company dress pants.

“Tasting the goods?” the owner asks, pointing at Ryan as he approaches from across the room. He’s a large man. Round-faced and balding, his charming dimple indents deeply when he smiles, and his jolly, rotund belly shakes as he laughs.

Ryan feels his mouth tighten to a thin line, hoping the owner won’t study him too quickly and see the tent in his pants. He quickly adjusts his legs, and shuffles his backside a bit deeper into his chair, willing his hard-on to shrink. Mind over matter; that was his motto.

“I’m just teasing you, kid,” the owner guffaws. “Always good to know what your product is.” He takes a seat next to Ryan and looks over the application. Humming and nodding, he scratches at his five o'clock shadow with his old, wrinkled hands, and then looks Ryan square in the face. “Good. All in order. You’re hired.”
Posted by Angora Shade at 3:09 AM