"Shadowy Tentacle Passion" is book one in the "Magical Girl Chronicles" by author Reed James. 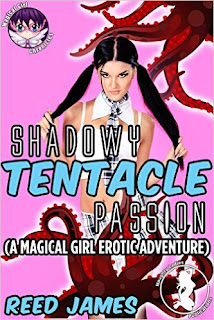 You can find this book on Amazon

My thoughts on the story:

I enjoyed several aspects of this story. The author did a great job describing Cora's conflict between exploring sex and wanting to be in love beforehand. Her boyfriend, Aidan, is everything she thinks she wants in a man. She trusts him and cares deeply for him. Her curiosity about sex has her wanting to learn everything she can, and she does her best to be true to her boyfriend despite her attractions to Iris, Ashly, and the man embodying Persephone's former lover, Hades. Cora's struggle was believable and something I believe a lot of people can relate to in their lives.

This story gets super points for being hella creative! I found myself pleasantly surprised by the classic, witty superhero style banter, complete with all the cheese! In order to transform into a superhero and use bits of magic to battle her enemies, Cora says things like "I am Magical Girl Persephone, Pretty Pussy Soldier for Truth and Justice!"  when she introduces herself, and "Sexy Razor Leaves!" when she uses a magic spell. Her magic is charged through exploring her sexuality and having sex, and the story is based on ancient culture while set in modern times. Nothing about the plot was dull, and because of its complexity with all these elements, I was felt compelled to comfortably read the story all the way through.

The best thing about this story is that it's sex positive. Although Cora struggles internally over what's okay sexually and whom she's allowed to sexually explore, she comes to understand that exploration, love, and pleasure are wonderful aspects of what should be included in (hopefully) everyone's life.

Overall I give this story 4 out of 5 Pussy Solider Stars!

You can find more information about Reed James Online: