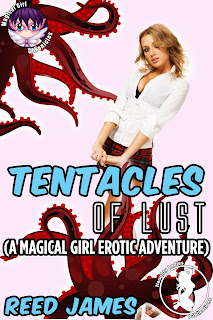 Reed James is a thirty year old guy living in Tacoma, WA. "I love to write; I find it freeing to immerse myself in a world and tell its stories and then share them with others." He's been writing naughty stories since high school, furiously polishing his craft, and finally feels ready to share his fantasies with the world.

2) What's your ultimate goal as a writer?

3) You write a lot of futa, werewolf, and other "creature" stories. What led you to write this sub genre?

4) How are you able to make fairytale creatures sexy?

"I think it's understanding what makes these creatures sexy: they're dangerous, powerful. They could hurt you, but don't. Instead they love you. They claim you. They make you safe and fight for you."

5) What's the weirdest or most surprising-to-you thing you've ever written?

"The first time I wrote a golden shower scene. I couldn't believe it was happening. I just sort of erupted onto the page. I've never really liked the genre, and yet, I enjoyed writing it."

6) What's your favorite thing to write about and why?

"Harem stories. I do like writing these. It allows you to explore love and relationships, have a variety of characters that play off each other, as well as lots of possibilities for different sex acts. Throw a few supernatural creatures into the mix and you have a hot tale!"

7) What message, if any, do you want your readers to walk away with after they finish one of your books?

"I don't intentionally put messages into my writing. I don't try to get preachy. My characters sometimes do, but what they are preaching might not be my views. I just want my readers to enjoy my story, the fantasy, and be happy. Fantasy is important. There's a lot of things that are illegal or impossible (and not just sexually) that we might like to do, and books/movies are ways to let us live out of fantasies. It's healthy. That's why I'm against censorship (allowing at you 'zon)."

8) What can readers expect to see more of in the future?

"An untitled Fantasy erotica in the vein of Sword and Sorcery. For years I've been working on a Fantasy world, building the gods, history, and cultures, making them all sexy, and I've been writing about Angela and Sophia; a knight and priestess on a quest to slay a dragon (it's more complicated than that). If's full of monster sex. It's nowhere near publication, but in six months, I hope to start releasing it."

In the meantime, more futa satires. I'm writing a Naked In College story; a genre where students have to go around class naked to let them learn about their sexuality. Of course, it's in my World of Futas universe where there never have been men, but futas. I hope to have this all published around late November. The Werewolf's Harem is continuing and I've just released the next volume of the Magical Girl Chronicle."