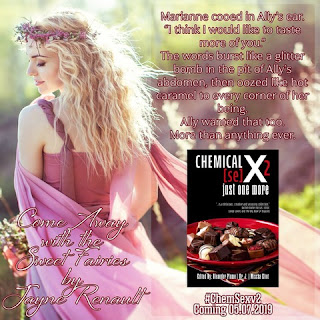 The talented and creative Jayne Renault has contributed to Chemical [se]X Volume 2: Just One More. Here's a bit about her story, Come Away with the Sweet Fairies:

Every year, Kablamfest — a magical weekend of friendship, music, and revelry — is held near the woods outside of town. Just like the year before, Robby, the de facto Kablmafest king, and his motley band of colourful characters have set up camp on the edge of the festival grounds to kick back and enjoy whatever magic the weekend brings.

Ally, new to the group and the festival itself, has no idea what all this “magic” is about… But when a mystical woman turns up with some special chocolates that cause quite the stir, Ally lets herself leans into the unknown and takes a bite. With the open acceptance of her friends old and new, she can then set out on an a truly magical—and deliciously smutty—journey of love and self-discovery. 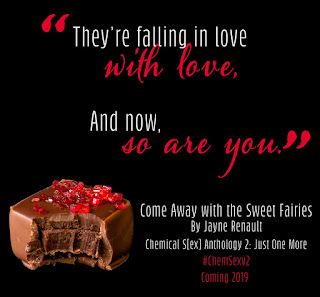 The Origins of Jane Renault

How do I even begin to tell my origin story?

I knew having the ice broken between Dr. J and I was huge before it even had a chance to prove it. I kept the lines of communication open with her while I waited to see what it had it store for me. In the meantime, I had already been keeping close twitter tabs on her, Mischa, and Oleander. I noticed before long that they were tightly woven, and was both fascinated and a little enviable of the writerly sisterhood they’d clearly developed. In the spring of last year, they were tweeting a lot about this Sisters in Smut “con” they had finagled.

One day, I rustled up the courage and emailed Dr. J about discussing the future of our collaborative relationship. I accosted Mischa with a gushing DM about how much I appreciated her virtual presence and though I didn’t know how it would develop, that I would love to collaborate with her in some way too. To my surprise and elation, Mischa was quick to respond with kind enthusiasm. Similar communication with Oleander followed in short succession thanks to Mischa’s gracious introduction.

So, mostly I just harangued Mischa, Oleander, and Dr. J with my love of their sisterhood and all that they do, so when it came time that they were opening their sisterhood up to others, they had already been brainwashed to think of me.

This is how I became a Sister in Smut.

By being a part of this inner circle, I was amongst those invited to participate in this new anthology. Having read (and loved!) the first iteration of Chemical Sex, I accepted this invitation without hesitation.

So, that’s how we got to me writing a story for this second anthology.

I love the concept so much. The original Chemical Sex story by Oleander Plume that made all of this possible is a quintessential piece of Oleander writing. It’s clever, well-woven, full of hilarity and excellent banter, all of which drives the piece at the perfect heady pace to the smutty goodness oozing from its gooey center. It’s no wonder it inspired so many others to fill an entire collection.

To revive this project with this particular powerhouse of lady smutmistresses is an honour and a privilege. The whole reason I am where I am, doing what it is that I do, is because I was on a conscious hunt for female community. For sisterhood. To foster spaces that allow such relationships and group power to thrive, and support the members within the increasingly intricate web that we’re weaving together.

That’s what led me to Bellesa. That’s what made it possible for make these connections with the Sisters. That’s why I’m contributing to this anthology.

It makes no difference if I’ve known these women for years or was introduced to them by way of the group chat for us to discuss Chemical Sex-related matters. We’ve all been join by a common goal — to write sex-positive smutty goodness, to stand as pillars and build community bonds, to encourage sex-positivity and nurture the empowerment that comes along with those kinds of spark. I didn’t doubt for a second that we would strike harmonious chords upon our first proverbial jam session.

The inspiration for my story came to me after I enjoyed a really lovely weekend at a weird little hippie festival in the townships outside of Montreal last summer. They was a veritably magical lady — the inspiration for my Marianne — who stopped by our campsite with a basket full of enhanced goodies, some of which were actually in delicious little chocolate form. It wasn’t about the trip within a trip that we went on as a group together. It was the fact that a variety of humans — many of whom were meeting for the first time, for we had all come as a mish-mash of mutuals to the core few — came together to enjoy a truly lovely community experience that celebrated friendship and exploration in a judgment free environment. It didn’t get anywhere near the level of scandalousness that my story does, but when I got home at the end of that weekend, invigorated with community love, I came back to the virtual world and met a wall of group messages from my fellow Chem Sex anthology writers. With my eyes swelling with actual tears of love and gratitude for the people in my life and how good that made me feel, I knew then that it was the lingering sensations fo this festival experience that my story had to mirror. And I already had a magical chocolate-bearing lady to get the creative wheels turning.

All that said, I have NO idea where King Robby came from. But I’m obsessed with him and so, so glad he came out to play. I hope you all feel the same when you meet him. 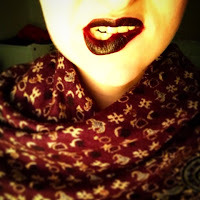 Most of my fiction can be found exclusively at Bellesa.co, and all the rest of my ramblings, fictitious and otherwise, live at jaynerenault.co. My first book is still a WIP, so you’ll just have to stay tuned for that.