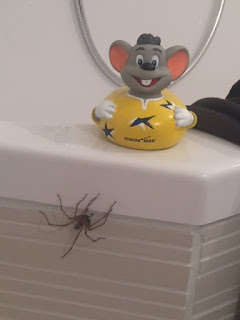 Happy August everyone. You know it's August in Sheep Shit Nowhere, Europe, when the spiders are as big as your mouse rubber ducky. They come in search of an attractive female, only to have themselves murdered in the process of their mating rituals. This guy did find himself a female, but alas, he was let down... down the long drop of gravity when I chucked him out the second story window. I'm sure he'll try again.

I keep trying, not with spiders, but with my goals. I began this year with both personal and professional goals, and then found myself in a total slump. Picture a very bored, lethargic writer, going out of her way to do anything but spank the muse. My muse needs this regularly to dose out the spells of inspiration.

I was a writing machine from New Years (hello resolutions!) until about March when I began a physical change. I didn't feel good about the way I looked and fit inside my clothes. It's no fun to feel like your body has betrayed you. Over the slow course of a decade, I gained some unflattering kilos. So I put down my computer, and instead, began an intense cardio workout of kickboxing and running. I also changed my diet to exclude my daily dip into the Nutella jar with a spoon and my nightly half bottle of red wine. I literally melted. Lost 9 kilo and I feel better about myself. Not only that, but I'm a MILF, or at least I feel like one. And that was the point.

But writing had the back burner. I didn't have an interest in putting down new words when I was so busy focusing on my personal goals. But now that I've met them, and I've learned how to maintain the body I want, I'm finding my way back to words.

My professional goals are lining themselves up in a neat little row inside my head. I'm working on my bucket list. To me, Cleis Press is the place to be published in my chosen genre. If you can be published with them, it means a) you don't suck, b) ... see A. Publishing with Cleis is the affirmation I need to know I've made it as a serious writer. I'm currently waiting to hear back from 3 separate Cleis submission calls. My writing partners are optimistic. So am I. But if nothing happens with these, I intend to keep trying.

(Side note about writing partners: I love you. Like, literally love you. You guys are the awesome sauce on my hot fudge sunday, the cheese in my quesadilla, the cinnamon on my oatmeal. You do so much for me. I don't know many personal details about you guys, but it doesn't matter. I know your brains. You know mine. We have *Dramatic Music* --a mind meld-- *Evil Laughter* I wouldn't have gotten this far without you. Kisses)

My efforts from earlier this year have been fruitful. Angora Shade will feature a brand new story with Bold Strokes Books in their upcoming Lesbian Travel Anthology releasing January 2019. My story takes place in Japan, where a young woman intends to prove to herself and her friends, that yes, she can be independent and travel the world alone. But the world is full of surprises, especially when she finds herself in the wrong taxi cab. Keep an eye out for this. Cover reveal and more details about this fantastic anthology will follow this fall.

My biggest news right now comes from connections with people. From the friends I've made online and the friends I have here in Sheep Shit Nowhere. Friends are important. They guide, support, and when they're true friends, fill your thirsty thoughts with more imagination than you ever thought possible.

I was invited to participate in an upcoming anthology with some very talented authors. INVITED. Yeah. Their group discussed whom they'd like to take part, and a handful of people were chosen. Is there a greater form of flattery? I don't think so. Needless to say, I'm both intimated by the quality of writing and storytelling these other writers have, as well as excited to be included in something so marvelous. I hope I don't let them down. This has the feeling of something wondrous and important for the purpose of interlocking creativity and learning, improving my craft, and reaching new readers.

But it hasn't stopped there.

I told a few friends about this invitation and the premise behind the anthology over drinks and a BBQ. I confessed about what I love doing. We were up till 3 in the morning talking about it. Keep in mind, in Sheep Shit Nowhere, you don't go talking about sex the way you shoot the shit with your neighbor. But these friends ARE neighbors. Their kids go to school with my kids. We do the carpool thing. PTO. And I didn't get you're a perv looks.

My news fascinated them. My friends are apparently, really fucking pervy.

I took them online and showed them, YES! Bigfoot erotica is a real thing. It became a running joke throughout our evening. And YES! They want me to write some bigfoot smut (which I've never read myself or intended to write, but hey, why not?). 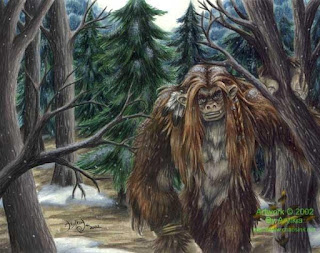 Their imaginations ran wild and helped me generate legit plots to test, enough to keep me busy for a very long time. They also want to read me. Google docs is gonna get a serious workout. Hopefully some vibrators will as well. Maybe they'll name their future babies Gora. That would be fun *HAH!*

I can't tell you how pleasant all of this has been. I'm not open with my true identity where my writing is concerned due to the negative stigma surrounding the erotic genre. And that's sad. My own mother won't speak to me about my "sex writing" and I've never dared share my "hobby" with my extended family for fear of full-blown rejection of me and mine. MINE. Isn't it horrid to think my grandparents, aunts, uncles, etc. would stop speaking to me, and in addition, my kids, simply because I write erotica and erotic romance! But it's true. I honestly believe my worst case scenario would happen. Not everyone is open about sex. Not everyone can mutter "lesbian" or "bondage" without a shudder. Not everyone is open to discussion and acceptance of the very basic nature of what makes us human. I wish my family could embrace diversity--the great spectrum of sexual possibilities--and the writing I do, which makes me happy. It shouldn't matter how a person gets their jollies so long as they and their partner(s) are consenting and safe. And it shouldn't matter what a person reads so long as their mind is active and their thoughts entangled in a space where possibilities expand.

But more of my friends know now. It's such a relief. I feel supported. I feel on top of the world.

So I'm going to write today. I'm going to embrace what I love doing and keep doing it. I'm feeling successful despite not having the impressive catalogue I thought I'd have after 4 years of taking my craft seriously. I have false starts and stuff I chuck out the window because it's for sure as hell crap, but I also have masterpieces of my own thoughts, broadcast in a way that makes sense to me and what I believe is a good story. That's all the more I want. 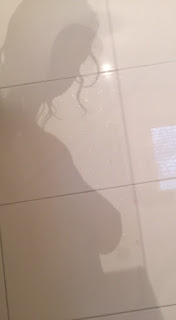 And as long as we're on the page of getting personal... And smutty. Cause I'm working on not shying away from sex or smutty or pervy or unusual whateverness of art (and hopefully someday I won't shy away from the truth with my family). Because that's what I do in my writing: art. But I do lots of art unrelated to writing. So here's my latest. The result of light and shadow, wet and dry, and the possibilities and limitations of using an iPhone in the shower: Silhouette of a Woman.

Stay smutty.
Posted by Angora Shade at 12:29 AM