Get Ready for a NEW RELEASE from Pandora Spocks!

Book 4 from the Dream Dominant Collection 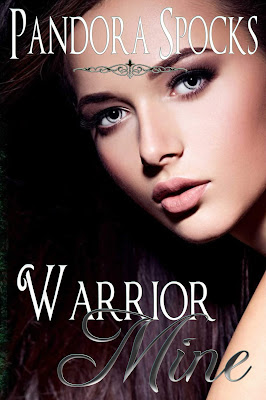 She is the perfect combination of princess and warrior.

Scott Nielsen and Jackie Walker. Their attraction is instant from the moment they meet. But he’s Dominant. And no way is she submissive. Is it a missed connection? Or a divine appointment?

Scott Nielsen is ready for change. He’s walked away from his career as a wilderness counselor, planning to start his own outdoor survival school. He looks up his old friend and former colleague Blake Walker, intent on leasing space at Blake’s family’s remote wilderness guest lodge. That’s where he meets Blake’s sister Jackie, who runs the lodge with her brother’s help. Her strength and independence intrigue Scott. A single mom, Jackie has no intention of being anyone’s submissive.

Scott’s heart aches at the idea of not having Jackie in his life. Can she take another chance on love, or will she insist on ignoring her submissive soul?

Enjoying the view, she watched as he walked to the bed and reached beneath it, removing a Kink Ink bag. “I went shopping myself today while I was in town.” His bag was larger than the ones she and Amy had returned with.

From the bag, he withdrew a mass of black straps and silver chain. Arching an eyebrow dramatically, he carried the device toward her, stopping beneath the massive log that served as the center beam of the cabin. Belatedly, Jackie noticed a heavy black ring attached to the beam. Reaching up, Scott secured a thick steel chain to the ring overhead. From the chain hung a curved black bar, with black straps in various lengths that dangled beneath.

Ignoring the butterflies performing dive bombs in her stomach, Jackie slowly padded toward him.

“Do you know what this is?”

She chewed her lower lip. “I have a pretty good idea.”

Jackie flushed crimson. “It’s a sex swing?” She eyed the device curiously. Two padded straps connected the ends of the curved overhead bar, one longer than the other. Two short straps with cuffs at the ends hung suspended from a chain at the center of the bar. And at either end of the bar hung a longer strap with cuffs at the end, presumably for ankles.

He nodded. “I thought,” with his hands on her hips, he turned her around, “we might try something interesting.” He moved the lower strap behind her thighs. “Sit, Princess.”

Heart pounding, Jackie did as she was told, grasping onto the straps that hung down. Scott knelt, fastening a padded black cuff around each of her ankles, spreading her wide. Then he moved the shorter padded strap behind her shoulder blades. “Now lean back, Princess. I’ve got you.”

Shakily, she lay back against the thickly padded strap, gripping the side straps for dear life. With a smirk, Scott peeled her right hand off the strap, kissing it lightly before raising it to the cuffs overhead. He followed suit with her left hand.

When she was completely fastened in, he gave her a little push and stepped back to admire his handiwork.

“Whoa,” Jackie gasped as she swung around in a slow circle.

Scott grinned. “How does it feel to be completely under my control?”

Jackie tried unsuccessfully to suppress a nervous giggle. “It’s not so bad.”

As she swung around, she lost sight of him. When he came back into view, he was holding a black satin blindfold.

“Tonight, Princess, is all about sensations. We’re going to cover your eyes, so you can concentrate on what you feel.”

He stepped toward her and stopped suddenly. “Did you come up with your own safe words?”

Her eyes widened. “Oh. Yes. I did.” She looked to him, feeling suddenly sheepish. Maybe we should just go with the original ones, she worried.

He raised an eyebrow, waiting for her to elaborate.

“Well,” she gestured with a shoulder, causing the swing to spin to the left, “I thought I’d use earth, water, and fire.”

Scott pursed his lips in amusement. “Earth, water, and fire. What about air?”

As she spun, she shrugged. “Well, I only needed three, so…”

“Earth is the same as green?”

Jackie nodded. “And water is like yellow, and obviously fire is red.”

“Obviously,” he smirked. “Alright, I’m about to blindfold you. Give me feedback.”

“Earth.” She watched him carefully.

“Earth it is.” He leaned down and kissed her tenderly before he slid the black satin mask into place.

The next time he spoke, he sounded further away. “If at any time you feel uncomfortable, use your safe words.” She felt a swish of air, as though he’d moved by her.

“I considered a ball gag,” his voice came from in front of her, “but I need to be sure I can read your body language before we take away your voice.”

Strong hands gently gripped her lower calves as he trailed kissed up the inside of her right leg, his facial hair prickling in a maddeningly sensual way. When he reached the place where her thigh joined her body, he skipped her needy place to travel back down her left leg.

Jackie groaned with disappointment, and she felt the vibration of his chuckle against her inner thigh. “All in good time, Princess. The King will feast, I promise.”

When he’d finished his travels, he released her, sending her spinning in a slow, dizzying circle. With the blindfold, Jackie had no sense of up or down, left or right. She felt as though she were floating.

Then she heard a soft buzzing sound, followed by Scott’s sexy chuckle. “Oh, this is a naughty toy. Just what did you get up to with this?”

Mortified, Jackie was at once glad for the blindfold, and sorry she wasn’t gagged. “I, um…used it.”

He whispered into her ear. “Yes, but how?”

“And where exactly did you press it?”

Jackie cleared her throat. “I pressed it against my pussy.”

She felt him stiffen. “Yes, what?”

He applied an open-handed pop to her pussy, and she yelped again. “How quickly we forget. Perhaps we should stop and allow you to consider the error of your ways.”

Jackie’s mind flitted to what Amy had said about orgasm denial, and she panicked at the thought of not being allowed to come during this play session. “Um, no, Sire, really, it was merely an oversight on my part, I’m so very sorry, please, I didn’t mean it, I just—”

Scott laughed out loud. “You’ve been talking to Amy, I see.” He whispered, closer now. “Don’t worry Princess. I plan to wear you out tonight.”

Pandora is busy on her laptop, working on her next spicy romance.