READ THE BOOK, THEN SEE THE ADULT MOVIE! 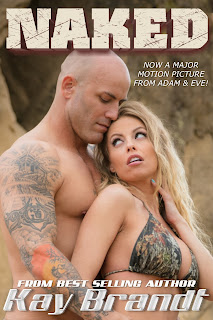 Paired as teammates on an extreme survival reality show, two survivalists, Cadence and Jackson, meet as naked strangers, totally dependent on each other for getting through the grueling four-week challenge surviving the wilds of Madagascar. Away from family, friends, lovers, their cellphones, the internet, and all modern conveniences including their clothes for nearly a month, Jackson and Cadence develop an uncommon bond that surpasses friendship. When the show ends, and Jackson and Cadence return to their normal lives without each other, the intensity of their bond proves unshakable for them both. Will their newly developed relationship remain as their shared secret, not to be explored beyond Madagascar? Or, is their chemistry strong enough to draw the two brave survivalists back together?

Almost ripping the latch just to get the stubborn bra off, Cadence's fingers unfastened the harness and set her full C-cups free. Why did I wear a brand new bra for this? She wondered to herself, wrinkling her nose over having to drop a clean, light pink bra onto the muddied ground. And then she noticed her matching underwear, and suddenly thought, Thousands of people are going to judge me by my pink lace panties, even my customers at the bank. Standing in the escalating heat, Cadence shivered with a weird mix of adrenaline and fear running through her chest, stripping out of her frilly bottoms and tossing them on the rest of her discarded clothes. She almost spoke, then quickly remembered that wasn't the direction given, and held her gaze off-camera until Dani called, “Cut!”

With a hard exhale, Cadence laughed as she stood in her nude awkwardness. “I don't think I took a breath during the entire segment.”

The crew laughed with her, averting their stares like professionals who'd seen one too many nude bodies on the job.

“I can't say that the worst is over because I'd really by lying then,” Dani shared, her laughter replaced by a more serious outlook. “Come on. Your partner's waiting to meet you.”

Brian instructed the crew on where to station themselves next, receiving the nod from Dani to move forward.

“Your partner has a camera following him, and Brian will stay on you,” Dani continued, “Try not to look at either camera as you two connect and wait till you hear me give the signal. Then we'll reposition and give further instruction. Cool?”

“Starting again,” Dani called out in director-mode, alerting her crew to get ready for the next shots. “Following Cadence as she takes the path to meet her partner.” Hands on Cadence's shoulders, she turned her nude participant in the right direction then gave a friendly nudge and told her, “We've made markings for you to follow. That's the last time we'll assist during the show unless there's an emergency. We just have to make sure for sake of time that you and your teammate find each other so we can film the next few segments before it gets too late.”

“Totally understand,” Cadence confirmed, facing her greatest challenge up ahead. Her heart rate increased before she started moving, knowing that a naked male stranger would be walking towards her soon. Bare, without any kind of protection, Cadence closed her eyes and waited for Dani's cue.