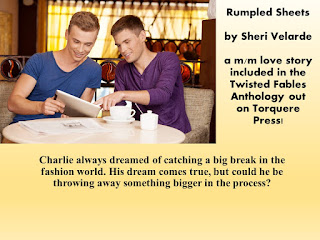 
A mysterious offer sends Charlie Martin into a frenzy. He must create an entire fashion collection within a week or risk losing a backer promising him his dreams. Just when he thinks it’s impossible, someone claiming to know him from his past agrees to help him. That is when things really get interesting for his career and for his heart.

Ron Stein is a likable but forgettable guy. He loves to help people and he really wants to help Charlie, someone from his school days who has finally noticed him. However Ron has some secrets to hide, will they ruin his chance at happiness?

Back at his loft/design studio, Charlie and Ron got down to work. First they went through what Charlie had around already made and ready to show. He was duly impressed with Rob’s keen eye and they soon had a couple of pieces, the rest ruled out as not up to his current standards, but it was a start at least. Next they moved onto sketches and found a few more pieces that would help the collection they were building. They poured over sketches and made plan until the sun had started to rise.

“Wow! Look at the time! We got so much done, mostly thanks to you! Without your critical eye I would still be sitting her with my head spinning in all directions! Let’s get some sleep and truly get started this afternoon?” Charlie yawned, exhaustion hitting him hard all of a sudden.

“I am still buzzing with energy. You go to sleep and I am going to whip out some patterns for a bit. I promise to sleep when I feel the need.” Ron smiled and headed over to a work table. Shaking his head at the other man’s energy, Charlie headed towards his bed. “Make yourself at home, I mean that.”

Ron gave a nod that he’d heard and got to work. Charlie passed out the moment his head hit the pillows. He knew nothing until he woke up late in the afternoon, cursing himself for sleeping so long and knowing he had put himself way behind an already impossible schedule. “Shit, shit, shit!” He yelled at himself before setting out to find and wake Ron to get to work.

He walked into his work studio and stopped, shocked. While he didn’t see Ron anywhere, all the patterns they had discussed the night before had been made and cut. It should have taken a couple people an entire day to get that much done, yet one man appeared to have done it all in less than eight hours. Some muslin had even been draped on a couple of dress forms, ready for Charlie to get to work.

As he stood there in amazement, wondering where his miracle worker had gone, he heard the door of his loft open and Rob call out, “Are you up sleepy head? I have coffee and we have a lot of work to get done tonight!”

“How… Why… How…” Charlie couldn’t seem to form a coherent thought or sentence. 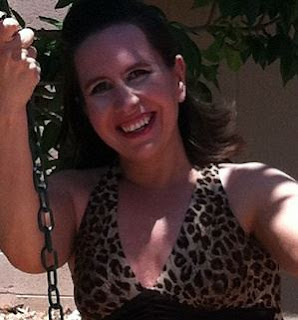 Sheri Velarde, lives in New Mexico with her husband and their two dogs.
Being an avid reader since an early age, she has wanted to be a writer for as long as she can remember. She has been writing all her life, but only recently started to actually try to pursue her dream of writing for a living. She specializes in all things paranormal and that go bump in the night. Her heart truly lies in exploring unknown worlds or adding the supernatural to our world. If it goes bump in the night or has magical connotations, Sheri writes about it.
She is constantly putting out new material with various publishers, so it is best to keep up with her on her website www.sherivelarde.weebly.com.
In her spare time Sheri is an artist, jewelry designer, independent comic writer/artist and freelance non-fiction writer. Hiking in the mountains, going to live concerts, art openings, museums, and hosting intimate dinner parties.

I started writing in grade school, actually. I wrote all through high school and college, but never seriously considered submitting anything for publishing. It wasn’t until I was in my early 30s that a friend encouraged me to submit to publishers. Those first stories were accepted and I have been putting out material ever since.

As far as writing romance, I think that people falling in love is such a part of human nature that it flows naturally into a story. That plus I grew up reading my grandma’s Harlequin romances. I guess it left an effect on me. Even in stories where I don’t intend to have romance, there is still some spark, some connection that at least gives the reader a might-have-been feeling of love.

Rumpled Sheets is based on my own time in the fashion world to some degree. Once you read the story, you will realize how competitive and fair weather some friends can be in that world. Those are directly taken from my own life. It all started off wanting to set a story in that world, then I kind of figured if there was a modern day Rumpelstiltskin, that is the world he would live in! It took off from there.

Rumpled Sheets is a modern retelling of Rumpelstiltskin. It may not be as fantastical as some of the other stories; it’s based more in reality, specifically the reality of the fashion world today.

There’s a mysterious offer, a ton of work that needs to be done that may or may not be humanly possible, and a possible love connection in the mix. I think what I liked best about this story is that both men involved have to overcome their own flaws and prejudices; they need to learn to love and forgive. It’s right at the heart of love for me.

To keep writing in the difficult world of publishing. This is a world of rejection, nay-sayers, bad reviews, tough competition, small publishers closing. There is a lot of negativity floating around sometimes. You need inner drive and strength to keep at it. You have to have a thick skin and love of writing itself to persevere.

5) What can readers expect in the future?

I am always putting out new stuff. I have a lot of re-releases coming out this year, as well as new projects. Right now I am trying to finish up a m/m romantic fantasy that I hope will be out in late spring. I love writing fantasy, and this piece has been a lot of fun! I am also moving into some science fiction this year as well.

6) What are some interesting facts about you?

I speak both French and Russian. I am also an artist, jewelry designer, and I am learning millinery (how to make hats).