Straying from the path on the way to his grandmother's house, Redd is pursued by a vicious, hungry wolf. Help arrives in the form of a mysterious stranger, but will Redd wish he'd taken his chances with the wolf when he comes to learn there is more than one way a handsome young man can be devoured?

Redd crashed through the forest as fast at the trees would let him. The space between their trunks appeared to be shrinking. Were they closing in on him? He put on a burst of speed. Branches stretched toward him, grasping at his clothing with jagged wooden fingers. Twigs and dead leaves cracked and crunched beneath his feet, and his crimson cloak billowed out behind him, flapping in the breeze and brushing over the foliage.

Then one of the trees got lucky. Its slender limb caught on the hem of Redd’s cape and sent him tumbling to the ground. The shock of the fall was enough to snap him out of his panic, and he lay there until his short, sharp breaths steadied to slow and deep inhalations. Once calm, he pushed up onto his elbows and assessed his surroundings.

The woods encircled him, dense and dark. He knew it was still daytime because here and there the sun’s rays penetrated the thick foliage, creating glistening puddles of light that made the reddening leaves shimmer. However, there was a faint bluish tinge to the illumination that told Redd dusk was not far off. The thought of being forced to spend the night in the forest sent a new shudder of fear through him and he scrambled to his feet.

Why had he done it? His whole life he’d been warned about straying from the path and he’d never been tempted to disobey before now. But then he’d never had any incentive until today. His grandmother was sick. Dying. No one had said the word aloud, but Redd had seen it in their faces when they spoke of her illness. Getting weaker, they muttered. Growing frail. Others spoke of the long years she’d enjoyed as if that somehow made up for the inevitable loss. For Redd, there could be no positive to numb the pain. 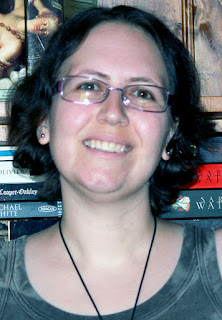 Asta Idonea (aka Nicki J Markus) was born in England, but now lives in Adelaide, South Australia. She has loved both reading and writing from a young age and is also a keen linguist, having studied several foreign languages.

Asta launched her writing career in 2011 and divides her efforts not only between MM and mainstream works but also between traditional and indie publishing. Her works span the genres, from paranormal to historical and from contemporary to fantasy. It just depends what story and which characters spring into her mind!

As a day job, Asta works as a freelance editor and proofreader, and in her spare time she enjoys music, theater, cinema, photography, and sketching. She also loves history, folklore and mythology, pen-palling, and travel; all of which have provided plenty of inspiration for her writing.

I loved books and reading as a child and always wanted to write my own; however, for a long time it was one of those dreams I talked about but never acted upon. Then in 2011, I was chatting to a published friend who encouraged me to submit a short story. That story was accepted, and the rest, as they say, is history. I began with M/F (which I still write under my other pen name Nicki J. Markus); then I started to write M/M as well in 2014. I was editing (that's my day job) for an LGBT publisher, and decided to try my hand at a story for one of their anthology calls. I've had stories in every one of their anthologies since, and in 2015 I started submitting to some other publishers as well.

I love fairytale retellings, so when I saw the Torquere Press open call, I knew I wanted to submit. I have written six previous fairytale and myth retellings (which are being released as a collection in March this year) and didn't want to repeat any of those. Red Riding Hood was one that hadn't fit well in that collection; therefore, it seemed the ideal one to tackle here. Plus, as soon as I thought of it, an ideal scenario came to mind.

Devouring Red is an M/M retelling of Red Riding Hood with a twist. I wondered: what if the wolf isn't the only dangerous thing in the forest? I didn't want to go too obvious with the wolf being a werewolf or something like that, so I considered the idea of being devoured in a more sexual sense. That is certainly there in the original tale: the little girl (in this case a young man) is tempted from the path and experiences a sexual awakening. In the original fariytale that is a warning against such things; in my story the ending is more optimistic.

Marketing. I have a rather fertile imagination and don't struggle to come up with ideas. Plus, as an editor, I feel fairly confident in my prose. However, when the story is accepted and I then have to get it to the attention of readers... well, that's something I find hard. With so much choice, it's really a full-time job to keep up with social media and find a way to promote your stories and get them noticed. I'm also a bit of an introvert at heart.

5) What can readers expect in the future? Working on anything new?

Absolutely! A couple of weeks ago my M/M PNR short story/novella series Souls for Sale released. In March I have the fairytale retellings collection and two more short stories in anthologies coming out, and I have a further three shorts and one novella contracted for release between April and June. At present I have eighteen shorts under consideration with publishers for different 2016 anthologies (a mix of M/M and M/F stories) and I am working on the third draft of my next M/F novel - a Regency PNR with a hint of Gothic. I keep busy! Anyone wanting to know more should check out my blog: http://www.nickijmarkus.com

6) Interesting fact about you?

I'm a keen linguist and have studied a number of foreign languages, including French, German, Italian, Czech, Danish, and (most recently) Icelandic.