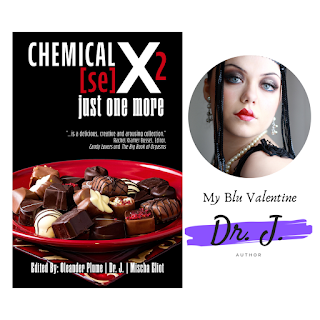 Sylvia’s friends arrange for an invitation to send her to a decadent Valentine’s party for singles. Her ex-best friend dares her to go, so she does. Sylvia and her sexy tablemate Blu, win the table display chocolate tower. She remembers her friend’s words: “Eat the chocolate.” So, she does and has quite a story to share.

Check out what readers on Goodreads have to say about Chemical se[X]: Just One More

How did you become involved with this delicious anthology?

I Skype with Mischa Eliot and Oleander Plume, my Sisters in Smut colleagues, regularly. The amount has increased since we met in real life almost a year ago. We had talked about starting a project together, and when Oleander threw out the idea of another take on Chemical Sex, I was ready.

How do you feel about the premise of an aphrodisiac chocolate anthology?

I love the premise of the original story Chemical [se]X where we meet Jane, Wyatt Henderson, and Ben Reynolds, their company CEO. The story starts in the laboratory where Ben explains the story behind the aphrodisiac component and tells them their job is to distill it from the leaves. When they do, they put it in chocolate and test it themselves. The outcome is epic. The notion that Oleander started this creative anthology concept from a call for submission that was rejected shows the love and belief in her work.

How did you come up with your contributing story? 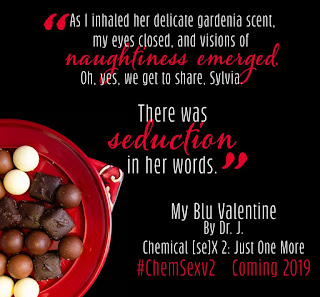 I wanted to write something different for me with my story, and I decided it would be female/female. When I write I choose elements from the world around me. I had attended a 1920s party for Halloween, and I had this phenomenal flapper dress, so it became the item that brought the story to light. Add a party, giveaway chocolates in a romantic place, and I had the setting. I worked a friend and enemies element into the mix. I loved it when Oleander said my story had a “twist in the tail.”

As we progressed in creating the plan, the middle way through I offered to make an LLC publishing company. Of the three of us, I am the one who doesn’t punch a clock and can devote some extra time to the logistics of getting the book out to the world. Doing all the processes, writing, editing, business creation and development, at the same time has been overwhelming at moments. But it has been the fantastic work and excitement of women I respect, that made it easier to keep moving forward. These writers created a unique synergy that speaks to camaraderie and support. It has been an honor working with them.

About Dr J.: Living the island life on the Atlantic coast, Dr. J. knits and supports all the visual and performing arts of the area. When not doing authorly things, you can see her on the pétanque court perfecting her competition moves while sipping something cold. 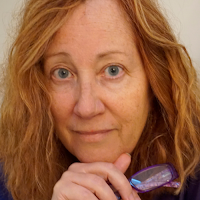