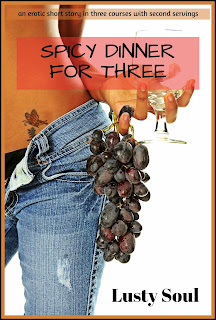 A steaming and passionate short story of a dinner party that makes you want to skip dessert.

Lucy accepts an invitation to her friend Sabine and her boyfriend's house to celebrate the turn of the year with them. As January 1st is Lucy's birthday, she has a special treat planned for her friends. Sabine and Lucy have cooked up the recipe together, and Sabine's boyfriend arc will be the lucky guinea pig that will get the first taste...

Lucy is Sabine's first lesbian lover. But she's in a very satisfying relationship with Marc, whom she loves to death. The only option she has to pursue her romance with Lucy while staying faithful to Marc is to bring the two together. Lucy, a succubus and master seductress, whose wanderings have brought her into the lives of many couples, knows just how to make that happen...

Excerpt:
A new song instigated our bodies. We started moving as one creature to the rhythm of the music, curving and swaying, swinging our heads and arms to the hammering beat, exhibiting our health and sexual dexterity with a surrender and skill only girls looking as good as Sabine and me could possibly get away with. Our touching augmented our passion to barely contained carnality, oblivious of the effect we had on the surrounding metal heads, both male and female. I was hers and she was mine. The kiss in the car had caught me by surprise, robbing me of my lead. But the seduction game - the hunt - had only now begun. I knew she had accepted that as a fact. She expressed this in the way she danced with me. Her hands roamed over my body. Hesitatingly at first, more audaciously as one song blended into another. It reassured me she wouldn’t hold back when the time would come to act on that certainty. I flexed the muscle full tension now, tried to exude as much of my surreal appeal as I could imagine I might, even though I had no idea how to control it, if that were even possible at all. I connected with her, responded to her eagerness with unabridged displays of desire and affection of my own. As she blurred the line between dance and seduction, so did I exhibit how deeply I longed to be with her by answering her touches, glances and teasing brushes of our lips. Our bodies and spirits further entwined until all senses in the club seemed focused on us. We danced for hours without taking even a moment to breathe. Everybody within sight was watching us, longing to join us, maybe get lucky with either or both of us. Some of the people and couples closest to us were almost invariably engaged in explicit displays of affection of their own, as if my excitement was like a shock wave pulsing through the crowd in concentric waves. We were approached several times by people who came dancing clumsily in our vicinity, once by a butch looking giantess that could have easily broken me in half to claim Sabine as her conquest. But the bodily union we had created with our mating dance repelled all attempts at rivalry. The attention we harvested, especially Sabine, only added to my excitement. I saw it had the same effect on the crowd, and on my soon-to-be lover. Her touches became even more daring, her advances more urgent. She clearly had difficulty restraining herself from going a step further. I abided a bit more, took my time seducing her, relished watching her explore this new found aspect of her appeal.Then came the one song I had been hoping and waiting for. A powerful ballad, slow and despondent, at first. But with a tempestuous climax, embodied by one of the most agile and bone-chilling voices in all of Europe. I grabbed her by the waist, pulled her close, and we danced. I buried my face in her neck and breathed in her intoxicating perfume. The smell of her sweat-moistened hair was an aphrodisiac more potent than anything the goddess Aphrodite herself could have cooked up to seduce mere mortal men and women. My fingers traced the curve of her lower back, ran over her spine until I felt it shudder with delight. They climbed higher until my hands rested on her shoulder blades. And as the sublime vocalist audibly drew in a huge breath to drive home the climactic apotheosis of this anthem of Indifferentia, I pressed her closer to me, searched her lips with mine, and sealed both our fates with the kiss I should have given her the day she first bumped into me.She almost went limp in my arms. I felt her hum with contentment in my mouth, a tantalizing vibration that made the hairs in my neck stand on end. She hugged my head and reciprocated the kiss with complete surrender. She had reached her breaking point; I felt tears trickle down her cheek, moistening our kiss even more with their salty fragrance. As the last notes of the song drifted away, she broke off our embrace, looked at me - indeed moved to tears - and signaled it was time to leave. She didn't hesitate one second, spun on her heels and started elbowing her way through the thick crowd that had aggregated around us. 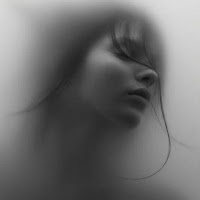 A wandering soul, lust; its sole motivation in seeking out encounters that stand out.

Lusty soul is a pseudonym, an avatar, an interactive immersion in erotica that surpasses mere physical appeasement. Personal encounters spiced up with a dash of fantasy that aim to leave you, the reader, wanting more.
Many manifestations online all have one thing in common...LS, the initials of many personas that all amalgamate into Lusty Soul.