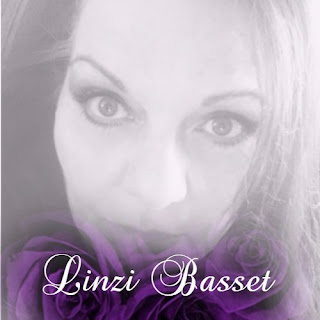 Greetings readers, writers, and fiction enthusiasts! Today Wicked Pen Writer Linzi Basset gives us some insight into her writing and inspiration. AND CHECK OUT the end of interview for information on how to win a $25 Amazon Gift Certificate from this author!

Q: How long have you been writing and why do you write?

Linzi: My first books were released in the early 1990’s, in my home language, Afrikaans and only in South Africa. They did very well, in that they were distributed to local libraries as well and were on the shelves for fifteen years. The usual timeframe is 8 years, so I was very pleased. Then life interfered and I became a single parent of two young kids and I didn’t write again until 2015.

Why do I write? This is the question we always have to think about, isn’t it? For me, it boils down to what Vincent Van Gogh once expressed: “I would rather die of passion than of boredom.” That's why I write. To express the deep well of passion that lives in my soul which is the part of me that I keep secreted away from my day to day existence. It's a part of me that had been suppressed for a long time primarily due to a very conservative upbringing. It was part of my familial and cultural heritage and what was expected of me. Now, I've reached a point in my life where I’m able to liberate myself and share my passion with others. Blossoming out of what once was the genesis of my own confined existence! Passion is what drives my creativity. Passion is what allows me to 'see' and express my own sensuality through the medium of the written word; to be able to draw from that deep well to define the beauty of eroticism and all that it encompasses. I want to share what I feel with others.

Isn’t it a universal truth that it’s our singular experiences and passion, for whatever thing or things that it may be, that molds us all into the individuals that we become? Whether it's hidden in the depths of our soul or exposed for all to see?

Q: What's the most challenging thing about writing or telling a story?

Linzi: Let me start by saying this, and it may come as a surprise to many people, but English is not my first language. When I started writing again a few years ago, I struggled with the enormous versatility of American English. All my stories are American-based, so I obviously needed to ensure that they would appeal to the American people. It was a massive struggle until I found an American editor that “Americanized” my writing!

The one thing that I battle with that needs constant work and attention is the passive voice…ahh!…and when I get a script back from my editor with notes indicating where I need to correct it. I do actually scream. And why…why does English have so many tenses? Good heavens! Why can’t everything just be in past, present and future? Why do we need past present, future present, past perfect…or is it perfect past…geez!!

And when it comes to writing a story, for me it’s to ensure every character has his or her own voice and not mine. In other words. there has to be a differentiation between each character that sets them apart from all the others I’ve written about or that others write about.

I enjoy the challenge to write well. To write a good story and make the emotional content and depth of my characters feel authentic. I enjoy the responses from my readers; how they become drawn into the stories, so much so, that they can’t wait for the next one. Mostly, I enjoy creating something special, unique and satisfying to fulfill my own expectation of what I set out to do when I type, Chapter One.

Q: Where do your ideas come from?

Linzi: Life, in all of its existential forms and wonders. All one needs to do is reach out and embrace it. It’s an enormous treasure trove of inspiration, isn’t it? It teems with emotions, passions, hate, laughter, tears, regrets, inner demons and so much more. One is only limited by one’s own imagination.

Q:  What advice would you give to new writers?

Linzi: By explanation, I need to share what my believes are about writing to share some advice with others.

I believe that telling stories in my own voice, driven by my own passion is what motivates me and that is the very essence that gets insinuated into each and every one of my stories. It's a distillation of who and what inhabits my being. I truly experience and live each and every scene. I feel every touch, every kiss, every harsh word uttered and that to me is the key. I write from the inside out. My stories are me. I live them. I couldn’t imagine writing a story looking in from the outside to try to describe something that I cannot see or feel. When I feel myself laboring unnecessarily to write a scene that I can’t connect to, I know it’s going to come out wrong. My editor always tells me to leave some things to the reader's imagination, because I become so involved with describing what I see and feel.

It may be that my advice to the writer in you, whoever you are, might sound overly simplistic, but it's essentially the discovery over time of listening to your own singular voice and the application of it, through hard work and passion to speak through the medium of the written word. Be comfortable within yourself. Write every story as if it's your own, your dirty little secrets that you're telling…and yes…maybe some of them are mine! Find your voice with the words that truly express what you think and what you feel, and it will flow into your story. Make each one stand out, make each chapter shine and make each scene come alive in every reader's mind. Let your passion come through and connect and your words will have the power to transport the reader into the story as a voyeur, or better yet, as a participant. You really want them to read your erotica books with just one hand….wink*wink!

Q: Who are your favorite authors?

Linzi: John Grisham. I just love his writing. I’ve read a variety of genres, but I have to say that I greatly favor legal suspense and thrillers. And then of course, there is Johanna Lindsey, who is a historical romance writer. I just love the humor and emotions she brings into her stories.

Q: What are you currently writing about?

Linzi: Many, many things! I currently have 8 WIPs. Yeah, frightening isn’t it! My new series I just started publishing is Club Devil’s Cove. A spin-off from the very first bestselling series I published, Club Alpha Cove. My fans have been driving me crazy to start with this one. And I love that they’re so passionate to read Rhone and Keon’s series.

Then there is the second novella series, Their Command series, that is continuing in the same trend as the first, Their Sub Series. The first book in this series will be released toward the end of November. After this series, Their Love Series will follow. Each a trilogy on its own.

There is also the continuance of The Alastor Chronicles, The Rebel Angels, The Tycoon Series, The Caught Series, The Madam Series, The Guthrie Sister and one which I’ve been hounded for but haven’t had the time to get to, The Dragon Shifter series.

And of course, my co-writer and I, under the nom de plume, Isabel James, are also currently working on a suspense novella, The Alibi, which I’m hoping we’ll publish either toward the end of the year or early in the new year.

As you can see, there are lots of writing to be done! I need more hours in a day!!

Linzi: That’s a tough one. Every character I write has his/her own strength and vices. Nawh . . . I can’t. It’ll feel like betrayal to those I don’t pick! They are all favorites and fun to write!

Q: What can readers expect from you in the future?

Apart from the projects listed, I am also working on a time travel series, involving Pirates of the Blackbeard era and hope to finish the first book soon – it’s already on Chapter 6.

I aim to produce a drama which will be a combination of suspense/thriller with a touch of romance, entitled, Forgotten. Not erotica, though, and I am exceedingly excited to start with this project.

I just wish there were more hours in a day! 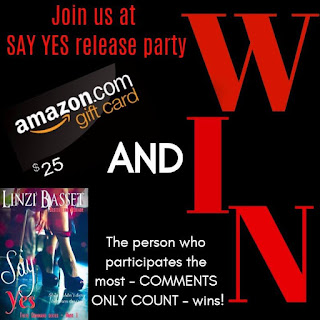 Have you accepted our invitation yet?? We're having a RELEASE PARTY for SAY YES by Linz Basset, on Facebook. Filled with lots of fun, games and amazing freebies and prizes. Not to mention the talented line-up of authors participating. The participation will only be considered by comments. Most comments from today (I'm doing daily games for fun) will win! Make sure that if you post or share you use the hashtag #LinziBuzz

Want a chance at winning a $25 Amazon gift card?
Then don't delay, join this group
facebook.com/groups/TALL.DOM.and.DIRTY 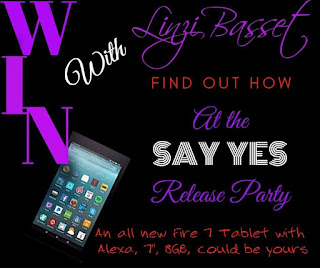 AND THEN
Accept this invitation to join the party. The more you participate, the better your chances of winning!
facebook.com/events/147111956046574 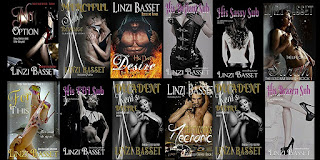 Check out her pages: