A Place of Permanence

New release! Just in time for the holidays! 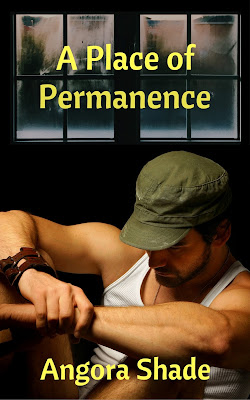 Jesse hates the still monotony of his small town existence. With the encouragement of his lover Antonio, Jesse sets out to “taste life” through joining the military. His service takes him across the world far longer than he intends, and he loses contact with family and friends. Years later, Jesse returns to a changed world, but with love still in his heart. Will Antonio be waiting?

“It’s not just a sculpture.” These were the first words Antonio had spoken to him.

The strange, slightly older man had sat on the bench next to Jesse. He’d spread his legs wide and comfortably until they’d bumped him, as if bumping the knees of a stranger was an acceptable and common action. Antonio’s hands had folded together in his lap as he’d leaned forward, resting his elbows on his upper thighs. Jesse had watched with curiosity as Antonio’s mouth twitched from side to side as he’d looked appraisingly ahead through his thick, black-framed glasses, eventually using his left pointer finger to drive his point home.

“It is like a living thing,” he’d stated. The low timbre of his voice had startled Jesse; he’d spoken with definitive passion, yet his words were soft as air. His accent became thicker as he’d continued; his consonants sharp, his vowels loose, and his R’s rolling. “You can sit here on this bench and say, ‘It’s just a sculpture of relatively bland, cold, welded metal’, but…” He’d gripped Jesse’s hand, pulled him to his feet, and directed him to the object’s opposite side. “When you reposition yourself here...” He’d darted a few steps to the left and made a crouch close to the floor. “You see something different you hadn’t noticed before. Suddenly, the light flashes across the object in a new way, you see a reflection or shadow, and your mind forms shapes that may or may not actually exist.”

Jesse hadn’t looked at the sculpture as Antonio had spoken, but at his hand gestures, moving with graceful dexterity. Each step he’d taken around the mangled metal thing before them had been a seductive dance, a deliberate footfall—an artistic pattern in its own rite. Eventually, with each word Antonio had spoken, the less interesting the room, other spectators, and everything around him became, and the more fascinated Jesse became with Antonio. The sculpture had been his creation—a discarded bucket of junkyard leftovers—molded, soldered, and distorted into a concept of modern beauty. But it wasn’t only Antonio’s art that was interesting; it was his words, his power, his passion.

Antonio is the essence of passion—pure, perfect, unhinged, unrestrained, and beautiful. Thoughts of him were all that had kept Jesse hopeful and on his feet; Antonio the reason Jesse came home. Home is the permanent state of being and the only place he wishes to exist; it’s the place where momentum stops, and complete is the emotion that resonates.
Posted by Angora Shade at 12:09 PM