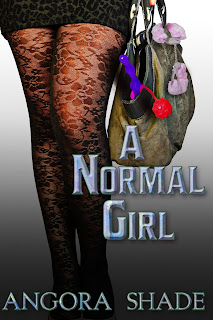 Ryan, a geeky technology apprentice student, is on his way to losing his virginity. Shy by nature, his lack of experience with women has left him unfamiliar with ideas other than vanilla sex. In his search for his ideal girl, he seeks out those he deems normal, only to be faced with and turned off by various sexual kinks. Ryan comes to learn that normal is relative, and that he and his ideal girl are anything but vanilla.

Ryan swallows the bite without taking his eyes from hers. Smiling at him, she reaches behind her head with her free hand and undoes the knot of her apron from around her neck. It falls to her waist where it’s tied in a bow behind her lower back, revealing a white cotton shirt with a low dipping v-line. Beth takes a bite of the creampuff, and then squishes it flat against her exposed cleavage.

“Oops,” she says innocently, raising her eyebrows and drawing her lips together like a pouty child. “I’m dirty.”

She watches Ryan gulp. He’s so nervous that the air in the room has become electric with anticipation, almost supercharged with explosive energy. He stands stiff and immobile as she feels his erection push softly into her torso. In order to help ease his shyness, she takes charge again, reaching with both her hands up to his face, removing his glasses and setting them onto the tabletop. His eyes wander with her movements, but come back to her face as she pulls and guides his head with both her hands down to the sticky mess on her chest.

“Clean me up,” Beth commands.

Ryan’s eyes dance from her face to her chest as he slowly bends his neck, still wet and glassy from the power of her smack. Beth wishes she could hear him thinking—hopefully something naughty, dirty, or negative about her aggressive actions—if only to have a reason to smack him again.

“Clean me up,” she says again, more force behind her words.

She feels his hands tremble as he takes her waist. As his face contacts her chest, she feels his tongue sliding through bits of crumbling bun and fluff of cream. He licks wide and flat, and then trails the tip of his tongue in a wiggly line. The sensations are divine, and dirty; just how she always fantasized sex at her workplace should be. It’s not something the owner would allow, but she was in control; he wouldn’t know. The rules are her own when it’s just her in the bakery.

Ryan’s body is so close she can feel the heat from his skin through his shirt, the hurried puffs of his breath on her front, and smell the musky scent of his long day mixed with his sweet aftershave. Beth drowns in him, dragging one hand through his hair, and the other grasping for his aroused cock.

“Lick me clean,” she encourages, moaning as he shoves his face deeper into her breasts, pulling aside her cotton shirt.

His hand enters inside her bra, smearing sugar over her swelling nipple. He brings his mouth over the bud, and sucks her skin into his mouth.